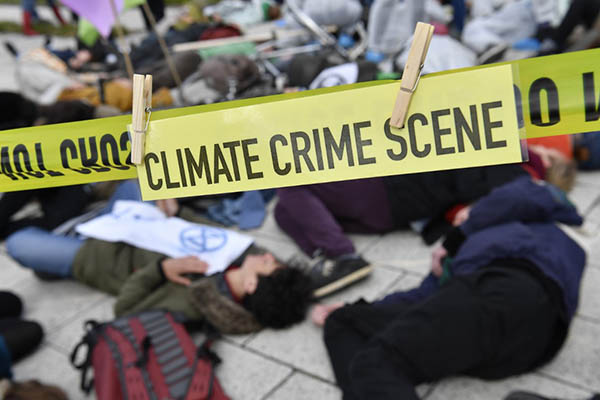 Headline-grabbing PR stunts have become the main tool of environmental pressure groups to turn up the heat on the companies behind the products that cause climate change and devastate the Earth’s natural resources. But campaigners are also diversifying their tactics, sometimes becoming active shareholders in corporations such as carmakers, chemicals companies and oil majors in a bid to force them to listen to concerns about the ecological and climate emergency the planet is facing.

“For me Volkswagen represents the immoral greed of capitalism,” 18-year-old Clara Marisa Mayer, an activist for the “Fridays for Future” climate movement in Germany, told AFP.

Environmentalists have also recently spectacularly dumped barrels of dead bees at the annual shareholder meeting of German agrochemicals giant Bayer; glued themselves to the London Stock Exchange; and staged sit-ins in front of oil giant Total’s headquarters in La Defense business district of Paris. Several marches will be held across the world this weekend against Monsanto and other agri-business giants.

For Gabriel Mazzolini of the French arm of Friends of the Earth, who took part in the April 19 blockade of energy companies at La Defense, politely seeking dialogue and commissioning expert reports were “no longer effective ways forward, given the pressing urgency of the situation.”

“Mass acts of civil disobedience allow people to get involved in non-violent protests that sometimes breach the limits of legality,” he said.

Dominique Bourg, who heads of the list of France’s Urgence Ecologie in the upcoming European parliamentary elections, says that “traditional Green parties don’t always incorporate the different strands of protest. But such protests are going to increase in number.”

In Britain, a movement calling itself Extinction Rebellion has sprung up advocating acts of non-violent civil disobedience against what it terms “climate inertia.”

The fast-growing movement, set up by British academics, staged 11 days of festive but highly disruptive rallies last month, bringing parts of London to a standstill to focus global attention on climate change. The movement has primarily captured the imagination of young people, who, inspired by Swedish teen activist Greta Thunberg, have regularly boycotted classes in a number of different European countries to stage protest marches.

The German division of Friends of the Earth says its fastest growing group of activists is among the under-25s. For many years, protesters have regularly turned up at the annual general meetings (AGM) of companies in Germany, but have tended to be dismissed in the past as cranks and crackpots. But with public awareness of the issue growing globally, such voices are increasingly becoming mainstream.

“No other company in Europe is more responsible for this crisis than yours. How can you justify yourselves to our generation,” student Luisa Neubauer told shareholders at the AGM of German power giant RWE, which has decided to continue mining coal.

Like some other activists, Neubauer was invited to speak although she doesn’t actually own any shares in the company she is targeting.

Away from the media glare that such protests attract, activists are seeking other ways of influencing the biggest polluters, buying shares in them, for example, in order to have a say in management decisions. “Shock tactics are necessary, but not enough,” says Mauro Meggiolaro, of the Italian Finanza Etica foundation, which makes “ethical” investments.

“We submit technical questions in writing so as to make any commitments traceable. And we keep questions for the general public for the AGM,” he says. “It can be more effective than an outside protest to engage in dialogue.”

Finanza Etica set up a Europe-wide network called “Shareholders for Change” in 2017.

Aurelie Baudhuin, of the Meeschaert AM fund, which is a member of the network, said her fund had bought 34,100 shares in Swedish fashion retailer H&M and then submitted a motion at the AGM to take environmental and social issues into consideration when awarding management bonuses. “Family shareholders hold 75 percent of the stock, so the motion wasn’t ever going to pass. But it sent a strong signal,” she said.

In view of such pressure, many companies in the financial sector have reduced their investment in companies active in the most polluting sectors. And while multi-nationals such as Swiss food and drinks giant Nestle are keen to emphasize their green credentials, campaigners refuse to be taken in.

At Nestle’s AGM in April, Greenpeace International director, Jennifer Morgan, lambasted the group’s use of throwaway plastic. And a few days later, protesters gathered in front of Nestle’s headquarters carrying a huge dragon made from plastic found in the sea.