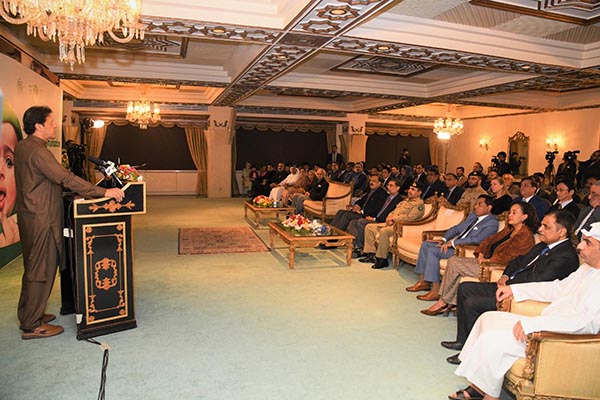 Prime Minister Imran Khan on Friday urges all Pakistanis to support the government’s anti-polio efforts to ensure national economic development and build a positive image of the country.

Launching the National Immunization Campaign in Islamabad, the prime minister said the eradication of the poliovirus was vital to ensure the future of not only children, but also the entire nation. The three-day drive, which starts on Dec. 16, aims to vaccinate around 39.6 million children nationwide with 260,000 vaccinators. The campaign is being held in the “low season,” during which the virus usually weakens due to winter and can be more easily eliminated through vaccination drives.

Khan personally administered the polio vaccine to a group of children and urged all mother with children less than five years old to personally visit local vaccination centers if they were unavailable when vaccination teams visited them.

The prime minister said that it was unfortunate that Pakistan was one of only two countries where polio remained endemic. He said the ongoing spread of poliovirus could have serious repercussions for Pakistan, especially for those desiring to seek employment abroad. Tourists wishing to travel here would also be discouraged, he added.

Khan said the Pakistan Tehreek-e-Insaf-led government’s efforts had resulted in economic stability, increased exports and enriched the country’s international perception. Now, he said, it was time to eradicate polio to maintain the pace of national development.

Terming polio workers heroes, the prime minister said they had sacrificed much in their goal of purging the country of polio. They had been targeted by militants and also braved harsh weather conditions and visited risky areas to vaccinate children, he added.

Khan also thanked donors for extending their cooperation to Pakistan in its goal of becoming a polio-free nation.

Special Assistant to P.M. on National Health, Services and Regulations Dr. Zafar Mirza said that it was unfortunate that Pakistan was currently experiencing a bad patch in its anti-polio efforts. He said the number of polio cases had been reduced to 12 in 2018, but had jumped to 98 this year. He said the current drive would be the last one of this year, and called upon the parents to join hands with the government to eradicate the virus in the coming years.