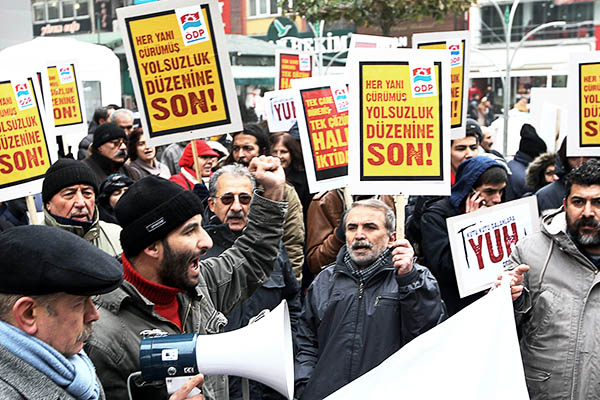 Turkish prime minister warns foreign ambassadors to do their jobs and stop engaging in ‘provocative actions.’

Turkish Prime Minister Recep Tayyip Erdogan claimed a huge graft probe in which the sons of two ministers were charged Saturday was an international conspiracy.

The case that erupted on Tuesday and targeted 89 people, including some of Erdogan’s closest allies, has triggered a crescendo of reactions from Turkey’s strongman. Rattled by the worst scandal of his 11-year rule and with crucial polls three months away, Erdogan has already purged the police command for cooperating with the investigation and on Saturday took it out on foreign ambassadors.

He described the probe into widespread bribery by members of his moderately Islamist regime as a “smear campaign” with international ramifications. “Some ambassadors are engaged in provocative actions … Do your job,” Erdogan said in televised remarks in the Black Sea city of Samsun. “We don’t have to keep you in our country.”

Erdogan’s remarks were considered a veiled threat to U.S. Ambassador Francis Ricciardone, after he was reported to have commented on the unfolding bribery scandal. The U.S. envoy however denied the media claims and said on Twitter: “The United States has nothing to do with the ongoing corruption investigation.”

Observers have interpreted the raids as a result of tensions between Erdogan’s government and Fethullah Gulen, a hugely influential Muslim cleric who lives in the United States.

Judges in Istanbul on Saturday charged the sons of Interior Minister Muammer Guler and Economy Minister Zafer Caglayan with acting as intermediaries in order to give and take bribes, the Hurriyet newspaper reported. Among the scores detained in pre-dawn raids on Dec. 17 were also the chief executive of state-owned bank Halkbank, Suleyman Aslan, and the Azerbaijani businessman Reza Zarrab.

The son of Environment Minister Erdogan Bayraktar was also held. He was released on Friday as were the mayor of Istanbul’s conservative Fatih municipality, Mustafa Demir, and construction tycoon Ali Agaoglu.

The Istanbul prosecutor’s office placed a ban preventing those who were released from travelling abroad, local media reported.

“This is a dirty plot against the national will,” Erdogan said. The prime minister, who faced an unprecedented wave of protests six months ago, has responded with a deep purge of the police, a force he once bolstered to counter the army’s influence. He sacked the Istanbul police and dozens of unit chiefs, essentially accusing them of not warning him that some of his closest aides were being investigated.

The appointment of Selami Altinok, a provincial official with no police career, as Istanbul’s new police chief was seen by critics as a bid to shut down the investigation. Altinok raised eyebrows when he landed in Istanbul on Thursday in the premier’s private jet.

Erdogan and Gulen have been embroiled in a bitter dispute since government plans to shut down a network of private schools run by Gulen’s Hizmet (Service) movement. Gulen lives in self-imposed exile in Pennsylvania but his organization wields considerable influence in several arms of Turkey’s state apparatus including the police, secret services and the judiciary.

In a video posted on Friday, Gulen hit back at those responsible for the police purge. Gulen lashed out at the “assault” aimed at finishing off the Hizmet movement, calling on his followers to stand firm and trust in God.

The graft probe has exposed bitter fault lines in Erdogan’s traditional power base and drawn calls for the government’s resignation from both his own party and the opposition. The government’s allegation of a plot echoed Erdogan’s claim that “foreign powers” were behind the nationwide May-June demonstrations, which had exposed a more tenuous grip on power than previously thought.

At least six people died and 8,000 were hurt in three weeks of protests against what demonstrators saw as an Islamization of society and an increasingly dictatorial ruler. “We will also spoil this game the same as we did during Gezi,” Erdogan said.