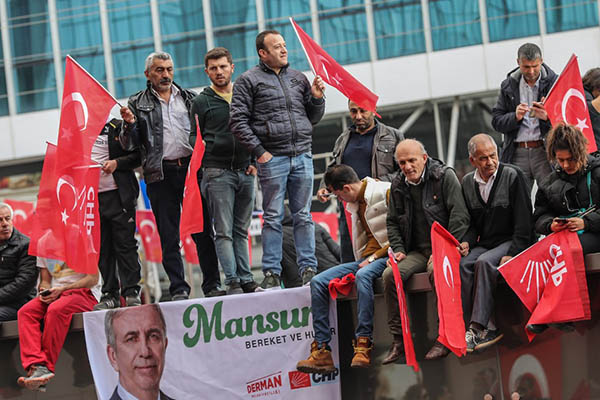 Erdogan’s AKP and coalition partner won more than 50 percent of votes nationwide in Sunday’s local ballot, but defeat in both Turkey’s capital and its economic hub would be a setback after the party’s decade and a half in power.

The AKP appeals with electoral authorities, who have two days to decide whether the claims of irregularities have merit, may signal more ruling party challenges to the surprise opposition victories.

“We have filed our objections with the electoral authorities in all 39 districts,” AKP’s Istanbul chief Bayram Senocak told reporters. “We have identified irregularities and falsifications.” He said the party had found an “excessive” difference between votes cast at ballot stations for their candidate and the data sent to electoral authorities.

Istanbul, the largest city in the country, was a key prize for Erdogan and he had fielded former premier and loyalist Binali Yildirim as candidate for mayor. But Istanbul was a very tight race and both Yildirim and the opposition CHP candidate Ekrem Imamoglu claimed victory in the early hours of Monday when tallies showed them in a dead heat.

Electoral authorities on Monday announced Imamoglu was ahead by 28,000 votes with nearly all ballot boxes tallied, prompting AKP officials to challenge to the result. But AKP deputy chairman Ali Ihsan Yavuz later on Tuesday claimed there was now a difference of 20,509 between Imamoglu and Yildirim during a press conference.

“The difference continues to fall,” Yavuz said in Istanbul, adding that the election in the city was the “most flawed in our democratic history.” He said, “There are many errors, irregularities.”

Imamoglu had 48.79 percent of the votes while Yildirim had 48.52 percent, Anadolu reported on Tuesday, citing preliminary results.

Imamoglu on Tuesday traveled to Ankara to lay flowers at the mausoleum of modern Turkey’s founder Mustafa Kemal Ataturk in a highly symbolic gesture Erdogan often does himself soon after his election wins.

The defense ministry later issued a statement criticizing the visit. “The ceremony was not in compliance with the ceremonial procedures and principles,” it said, adding that relevant staff had been given warnings. “Had the other party won, I would have said ‘congratulations Mr. Binali Yildirim,’ which I do not say because I am the one who won,” Imamoglu told reporters. “They are behaving like a kid who has been deprived of his toy.”

AKP party spokesman Omer Celik on Monday had said they had found discrepancies between reports from polling stations and vote counts in both Ankara and Istanbul. Erdogan, himself a former Istanbul mayor, had campaigned hard in the city. But the ruling party may have been stung by the economy with Turkey in recession for the first time since 2009 and inflation in double digits.