EU Mission Not to Monitor Voting in FATA, Balochistan 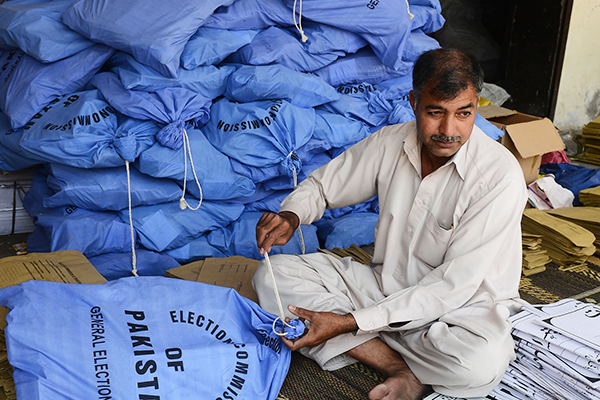 The 110-member monitoring team will observe polling in 193 out of 272 constituencies nationwide.

The European Union’s 110 election monitors will not be posted in the security-sensitive federally-administered tribal areas or in Balochistan province to keep watch on polling for Pakistan’s national and provincial assemblies on Election Day, May 11.

Michael Gahler, chief of the EU Election Observation Mission to Pakistan, said late Monday that the monitors would be present in 193 out of 272 constituencies, allowing them to get a “good sample” nationally. “For us to judge a process, we need a sample but we do not need to be present in each and every constituency or even region,” he told reporters.

The EU has judged it too dangerous to send any of its observers—drawn from the bloc’s 26 member states plus Norway, Switzerland, and Canada—to the tribal areas or to Balochistan. Security concerns also kept the EU from sending election monitors to the tribal areas to gauge the fairness of the 2008 elections. The EU also monitored the 2002 elections.

Gahler is confident his team will still be able to work effectively to observe the elections, which will mark Pakistan’s first ever transition from one fully-civilian elected government to another. “We are in constant contact with local observation groups,” he said. “Of course, in our report we only take information that we have assessed with our own eyes and ears but that doesn’t exclude that we take note of what others, who are on the ground, report.”

According to the Election Commission of Pakistan, there are 1.75 million registered voters in the tribal areas and 3.35 million in Balochistan, a province reeling from sectarian and separatist violence. Together, these voters represent just 6 percent of total registered voters.

The 110-member team has to coordinate with all election stakeholders, including nongovernmental organizations, to assess the fairness and politico-legal context of the 2013 elections in accordance with, among others, the European Instrument for Democracy and Human Rights and the U.N.’s 2005 Declaration of Principles for International Election Observation and Code of Conduct for International Election Observers.

The EU mission will also “assess whether the media, both public and private, provides balanced coverage of the election campaign in accordance with the existing legislation, using both quantitative and qualitative analysis” and “the tone of the media coverage of the campaign including recording any statements that ‘go beyond acceptable limits.’” It will also review the freedom of the media to “carry plural political expression.”

The final report will also include analysis of “the legal framework governing the election in Pakistan in accordance with international standards for democratic elections, taking into consideration the country’s Constitution, the electoral code, the law establishing the Electoral Commission of Pakistan, other electoral regulations (such as decrees, ordinances, decisions) as well as any legislation or regulation governing other aspects of public life related to the electoral process (such as the media law, self-regulation authority laws, civil society regulatory framework, etc.).”