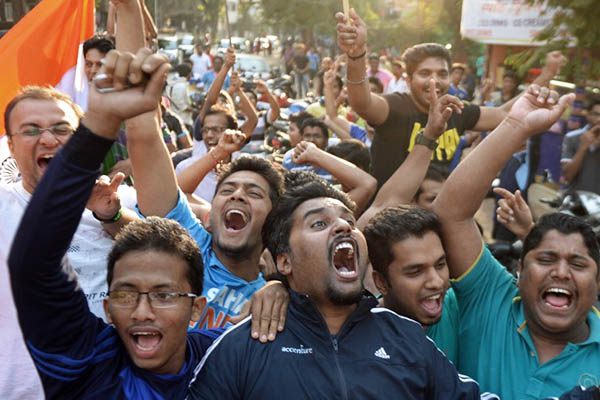 Jubilant fans spilled out onto India’s streets and let off firecrackers after the national team defeated bitter rivals Pakistan in their opening World Cup match in Adelaide on Sunday.

In bars, restaurants and homes nationwide, millions watched Virat Kohli score a majestic 107 before his side cruised to an emphatic 76-run win at the jam-packed Adelaide Oval. Scores of euphoric university students gathered in the heart of New Delhi as soon as the last Pakistan wicket fell, dancing and waving the saffron and green Indian flag.

“I love you, Virat Kohli, it’s the best gift that you could give India,” said Shreya Sharma, 21, planting a kiss on a giant poster of the Indian vice-captain. Across the border, the mood was a mirror image.

Millions of Pakistanis nationwide watched the match either at home or in restaurants with specially installed big screens, but left downhearted. “I had huge feelings and excitement in watching this match which Pakistan has lost,” said Farhat Irshad, 22, who saw the game in an Islamabad restaurant in the company of about 200 others.

India have won all their previous World Cup matches against Pakistan, but Pakistani media and fans were hoping against hope for a first-ever success.

“We had a lot of expectations, that Pakistan might change history … but they did not make it possible,” Irshad added.

Indian Prime Minister Narendra Modi, who had called his Pakistani counterpart Nawaz Sharif to wish him luck before the match, took to Twitter to congratulate the team. “Congrats Team India. Well played. We are all very proud of you,” he tweeted.

For legions of supporters in both India and Pakistan, a win over the old enemy is almost as important as winning the tournament. “The pressure is now off India, now they can relax for the rest of the tournament,” said S. Shriram, a software professional. “For me, India has won the World Cup today!”

Earlier in the day a photo trending on Twitter showed guests at a wedding craning their necks to watch the match live on a giant screen.

On Saturday special prayers were held at a famous temple in Mumbai where fans chanted hymns in front of a replica of the World Cup Trophy—kept beside Ganesha, the Hindu god of luck and fortune. However, some Indian fans were left seething after their Air India flight to Sydney was delayed by eight hours—meaning they missed the game altogether—according to local newspaper reports. Enraged fans held heated arguments and engaged in “fisticuffs” with besieged airline staff, who blamed the delay on a shortage of cabin crew, the Times of India reported. “AI [Air India] has killed the World Cup for us. We had a connecting flight to Adelaide. We won’t get to see it even on TV now,” one passenger told the Hindustan Times.