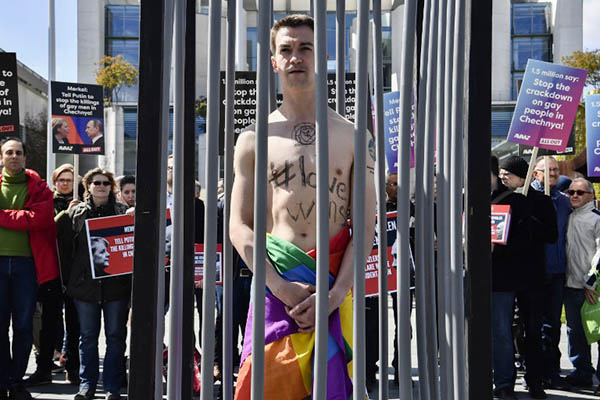 Five European foreign ministers have written to their Russian counterpart to press for action over a reported crackdown on gay men in Chechnya, which has allegedly led to some deaths.

In a letter obtained by AFP on Wednesday, they called on Moscow to investigate the “terrible” allegations of acts in breach of international treaties and Russian law. Recent reports of a brutal crackdown on gays in the mainly Muslim North Caucasus region led for a decade by strongman Ramzan Kadyrov have caused an international outcry.

“We are deeply worried by the great number of recent reports… that homosexuals have been persecuted and some even killed on account of their sexual orientation by regional state authorities” in Chechnya, said the ministers from Britain, France, Germany, the Netherlands and Sweden. In the letter to Russia’s Sergei Lavrov they noted “with concern” that a meeting between Russian President Vladimir Putin and Kadyrov last month had failed to lead to an inquiry into the claims.

“In that context and against the background that recent reports indicate that persecution of homosexuals is still ongoing, we call on the Russian government to investigate these terrible reports and to ensure the safety of activists and journalists investigating these abuses,” they said. They also urged Moscow to “weigh in” on Chechen authorities “to stop any persecution immediately, offer all affected persons the required assistance with immediate effect and bring perpetrators to justice.”

In March, the Novaya Gazeta opposition daily reported that Chechen authorities were imprisoning and torturing gay men in the conservative region where homosexuality is taboo and can be punished by killings by relatives.

On Monday, Russian police detained young activists protesting against the persecution of gay men in Chechnya at a May Day parade in Saint Petersburg, an AFP photographer witnessed. Riot police in helmets detained the activists—some holding rainbow flags—and bundled them into police vans during Monday’s parade in the city’s historic center.