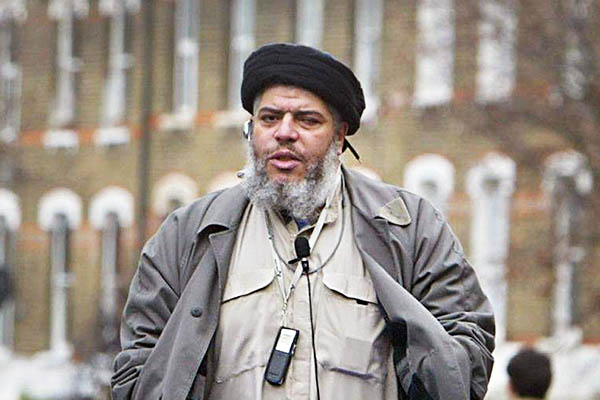 Abu Hamza has been convicted of kidnapping Western tourists in Yemen and other terror activities.

A U.S. judge on Friday sentenced British hate preacher Abu Hamza to life behind bars for the deadly kidnapping of Western tourists in Yemen and terrorism, calling him “evil” and his crimes “barbaric.”

The hook-handed imam, blind in one eye and a double-hand amputee, was a tabloid bogeyman in Britain after the 9/11 attacks for preaching vitriolic, anti-American sermons at the Finsbury Park mosque in north London.

The 56-year-old stared impassively at the table and pursed his lips as Judge Katherine Forrest jailed him for life, eight months after he was convicted by a jury after a four-week New York trial. Saying he will never be released, Forrest told the court the world could not be safe with such a man at liberty exhorting others to acts of violence in the name of religion.

Abu Hamza, whose hands were blown off by an explosives experiment in Pakistan, had alarmed the jury by professing to love Al Qaeda mastermind Osama bin Laden.

Forrest said she had thought long and hard about the severity of the sentence, for a complicated man who was a loved father of nine but who showed no remorse. “Evil comes in many forms but doesn’t always show itself immediately in all its darkness,” Forrest said. There is “a side of you that this court views as evil.” She said he played a leadership role in the 1998 kidnapping of 16 Western tourists in Yemen, four of whom were killed, and in trying to set up a terror training camp in Oregon in 1999. His crimes were “barbaric” and “unacceptable in a civilized society,” she added.

Real name Mustafa Kemal Mustafa, Abu Hamza provided material support to Al Qaeda, assisted the Taliban, sent terror recruits to Afghanistan and perjured himself at trial, Forrest said. Although he was not on the ground in Yemen, he provided the kidnappers with an “indispensable” satellite phone, she added.

Forrest sentenced him to two life sentences over the kidnapping, and a combined total of 100 years on the nine other counts, all to be served concurrently.

Dressed in navy scrubs, pale behind spectacles and sporting a trimmed gray and white beard, Abu Hamza sat in court chatting to his female lawyer and occasionally put on a prosthetic limb to take notes.

He insisted he was innocent and demanded to be sent to a prison hospital, saying he had suffered “torture” as a double amputee suffering from diabetes in a detention facility in New York. “With all honesty I do maintain my innocence,” he told Forrest. He claimed to have been bullied, subjected to small but repeated injuries. He also complained of missing teeth and in-growing toenails.

Abu Hamza’s lawyer Sam Schmidt had asked for a lesser sentence that would give his client “a chance to spend some of the last few years of his life with his family.” He argued that Abu Hamza should not be confined to the “extraordinarily harsh” supermax federal prison ADX Florence in Colorado, where the United States jails its most dangerous convicts.

Forrest made no recommendation on where Abu Hamza should serve his sentence, leaving it to the Bureau of Prisons to determine.

British Home Secretary Theresa May welcomed the sentence and said Abu Hamza “belongs” behind bars for the rest of his life.

He was arrested in Britain in 2004 at Washington’s request and sentenced to seven years in 2006 for inciting murder and racial hatred, before being extradited to the United States in 2012. U.S. government prosecutors argued that a life sentence was the only appropriate punishment.

“Abu Hamza’s blood-soaked journey from cleric to convict, from imam to inmate, is now complete,” said top Manhattan attorney Preet Bharara, evoking this week’s attack on a satirical magazine in France. “Abu Hamza finally faced justice, as all those who engage in terrorism against innocent civilians must, here in the U.S., and all around the globe, as the terrible events in Paris remind us.”

Forrest read out extracts of Abu Hamza’s fiery speeches, including a justification of suicide attacks and his happiness at the 9/11 attacks. She said he was intelligent, articulate and privileged, and that the Egyptian-born engineer could have chosen a different path. But instead he preached violence.

Campaigners will likely seize on the sentencing as further proof that terror cases can be handled effectively in U.S. civilian courts as pressure builds to close the Guantanamo Bay prison camp.

It is crazy to feed this scum. Let’s hope he goes on a hunger strike and dies. Maybe a sadist guard can beat him to death, so that justice is truly served.