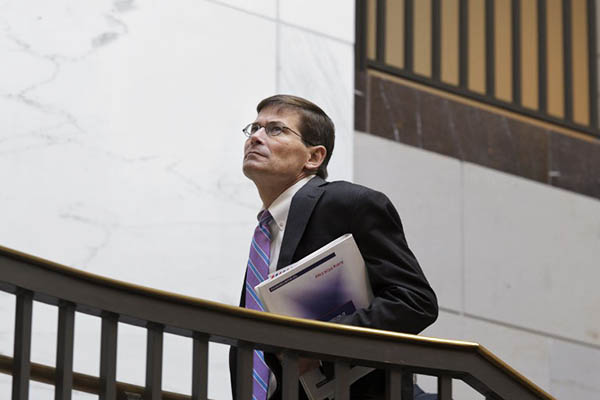 Donald Trump suffered more blows to his presidential campaign on Friday when a CIA ex-director accused him of being an “unwitting agent” of Russia, as polls showed rival Hillary Clinton surging, even in traditional Republican strongholds.

Trump’s drive for the White House hit another snag when he made the rare acknowledgement of an error, backtracking from claims that he saw video footage of money being transferred to Iran by secret plane. Despite the stumbles, including Trump’s refusal to back down in a confrontation with the parents of a Muslim American soldier killed in action in Iraq, his campaign chairman Paul Manafort told Fox News it has been “an improving week.”

The latest setback came in the form of harsh criticism by Michael Morell, a 33-year veteran of the Central Intelligence Agency who served presidents of both parties and then helmed the agency in 2011. “On Nov. 8, I will vote for Hillary Clinton,” he wrote in a New York Times column, adding that Trump “may well pose a threat to our national security.”

Morell said that as Russia’s president, “Putin played upon Mr. Trump’s vulnerabilities by complimenting him. He responded just as Mr. Putin had calculated.” Trump has praised Putin as a great leader, and taken policy positions “consistent with Russian, not American, interests” including endorsing Russian espionage against U.S. figures like Clinton, Morell said. “In the intelligence business, we would say that Mr. Putin had recruited Mr. Trump as an unwitting agent of the Russian Federation,” he added.

Trump’s running mate Mike Pence, the governor of Indiana, was dutifully dispatched to counter the assertion, telling NBC that “these people are playing politics.”

Clinton was enduring criticism of her own on Friday, as she took the rare opportunity to face reporters at a Washington conference of journalists where she was pressed on her recent comments that she has been truthful about her private email account while she was secretary of state. The Democrat had told Fox News Sunday that FBI director James Comey said her “answers were truthful” about whether she sent or received classified material via private email.

That comment was branded false by Washington-based fact-checkers, but Clinton doubled down on it on Friday, while admitting some of her answers may have been less than clear. “I have said during the interview and in many other occasions over the past months that what I told the FBI, which he said was truthful, is consistent with what I have said publicly,” Clinton said. “So I may have short-circuited, and for that I, you know, will try to clarify.”

In Georgia, which has voted Republican in every presidential election since 1996, Clinton leads by four points, according to an Atlanta Journal Constitution poll Friday.

Capping the lousy week, Trump admitted on Friday he wrongly claimed to have seen secret Iranian footage of $400 million in hard currency being delivered to Tehran as payment for the release of U.S. prisoners. Trump raised eyebrows this week when he made that assertion and gave many details of what he said he saw in the film.

But he then made a rare backtrack. “The plane I saw on television was the hostage plane in Geneva, Switzerland, not the plane carrying $400 million in cash going to Iran!” Trump tweeted.

Trump’s campaign has insisted that the money was “a payment for hostages” held in Iran who were released in January. The White House says it was returning cash from an unfulfilled 1970s Iranian military order. “We do not pay ransom for hostages,” President Barack Obama said on Thursday.

Trump tried to help right the ship with a campaign appearance later on Friday in Wisconsin, the home state of House Speaker Paul Ryan, whom the brash real estate mogul this week initially refused to endorse for his congressional re-election bid before reversing course.

The nominee meanwhile announced additions to his economic advisory team. But several of the new members—13 men and no women—are super-rich investors and bankers whose inclusion on Trump’s campaign could be seen as smudging his populist economic message and his claims to be fighting for America’s middle class.

“I am pleased that we have such a formidable group of experienced and talented individuals that will work with me to implement real solutions for the economic issues facing our country,” Trump said in announcing the team. Absent among the group is billionaire investor Carl Icahn, who has endorsed Trump and has been described as a master negotiator by the nominee.