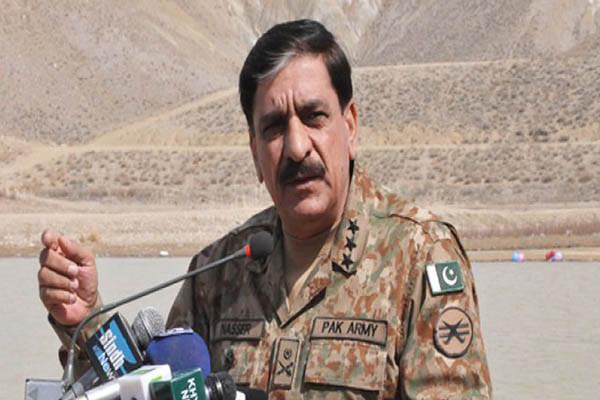 Senior official claims option is being considered at a ‘very high level.’

Pakistan is considering appointing a former general from the military as the country’s new security chief, an official said Monday, a move critics said demonstrated the Army’s rising grip on civilian power.

A senior security official told AFP there was a “strong likelihood” that recently retired general Naseer Janjua would be appointed to the post, presently held by the prime minister’s adviser on foreign affairs Sartaj Aziz.

The official, speaking on condition of anonymity because he is not authorized to speak to media, said the final decision rests with Prime Minister Nawaz Sharif, but gave no other details.

Sharif was Monday traveling to the U.S. for talks with President Barack Obama from Oct. 20-23.

The official said the issue has been under discussion at a “very high level” for some time, and local media has also reported Janjua was being considered for the job. Some analysts hailed the proposal, saying it would go a long way toward increasing coordination between the civil and military leadership of the country.

“The government and military have realized need for enhanced coordination between civil and security agencies to effectively deal with the security issues,” said security analyst Talat Masood.

However, critics said it demonstrated the Army’s lack of faith in the government. “The Army does not trust the confused civilian leadership, which lacks confidence,” said analyst Imtiaz Gul. “There is also a lack of trust in the civilian government’s capability in foreign policy and security issues,” he said.

Pakistani officials have blamed India for stirring up a separatist insurgency in Balochistan province. Janjua, who served in Balochistan, is considered an expert on the province, and Gul said he could “probably support Pakistan’s claim.”

Sharif, who came to power in May 2013 for the third time, has a history of strained ties with the military. He was first elected in 1990 but sacked three years later on corruption charges. His second term from 1997 to 1999 ended in a military coup by General Pervez Musharraf.

When he took power for his third term in 2013 he vowed to improve relations with India. After the election of his counterpart Narendra Modi in India a year later, hopes were high that a breakthrough might be possible. Instead a surge in firing across the de-facto Kashmir border since 2014 has claimed dozens of civilian lives on both sides and brought relations to their lowest level in more than a decade.