Home Latest News ‘Executions Are An Act of War’

‘Executions Are An Act of War’ 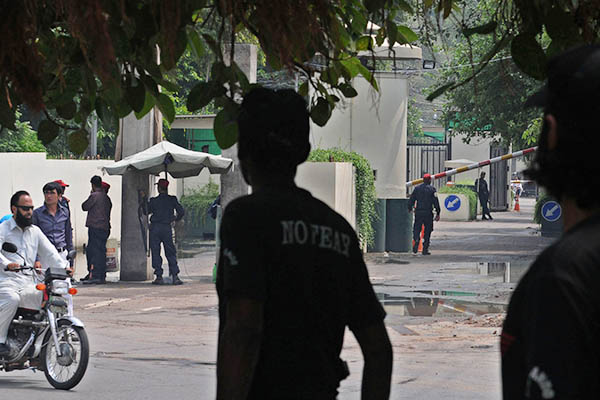 A one-page pamphlet issued by Punjabi Taliban chief Asmatullah Muaweya on Aug. 12 warns: “The PMLN [Pakistan Muslim League-Nawaz] has to face the consequences if its government enforces the death penalty for prisoners.” The statement (posted in full below) adds: “We fight all political parties who are being used as puppets by the Army. Some unwanted elements of the secret agencies are trying to implicate PMLN in this war.”

According to Muaweya, courts have announced death sentences for several members of his organization and their executions would be tantamount to war. “There are death warrants being issued against our men in Punjab. If they are executed, then it will be quite evident that the PMLN is imposing this war on itself.”

The statement also cites the Awami National Party, which had ruled the Khyber-Pakhtunkhwa province in the previous government, as an example for the PMLN. Muaweya claims the Army used the secular party against the Taliban, leading to retaliation. “Does the PMLN intend to follow in the footsteps of the ANP?” it asks.

The statement claims that the Pakistani Taliban’s sincere efforts for peace talks were sabotaged by the death of Maulana Wali-ur-Rehman in a drone strike. It states that implementing the death penalty would continue the bloodbath and it is the responsibility of Prime Minister Nawaz Sharif and interior minister Chaudhry Nisar Ali Khan to “protect the country from outraged activities.”

Muaweya also expresses annoyance at the government’s insistence on negotiating peace with India. According to the statement, “it is a disloyalty” to Islam and the nation to demand talks with India and not “sons of the soil.”

The statement concludes by stating that peace talks between the government and the Taliban can only succeed if drone strikes end, missing persons are recovered, and the PMLN and PTI refrain from pro-India and pro-U.S. “conspiracies.”

Earlier this month, the TTP announced that it was ready to negotiate with the government if religious and intellectual leaders comprise the interlocutors.

The pamphlet distributed by the Taliban: 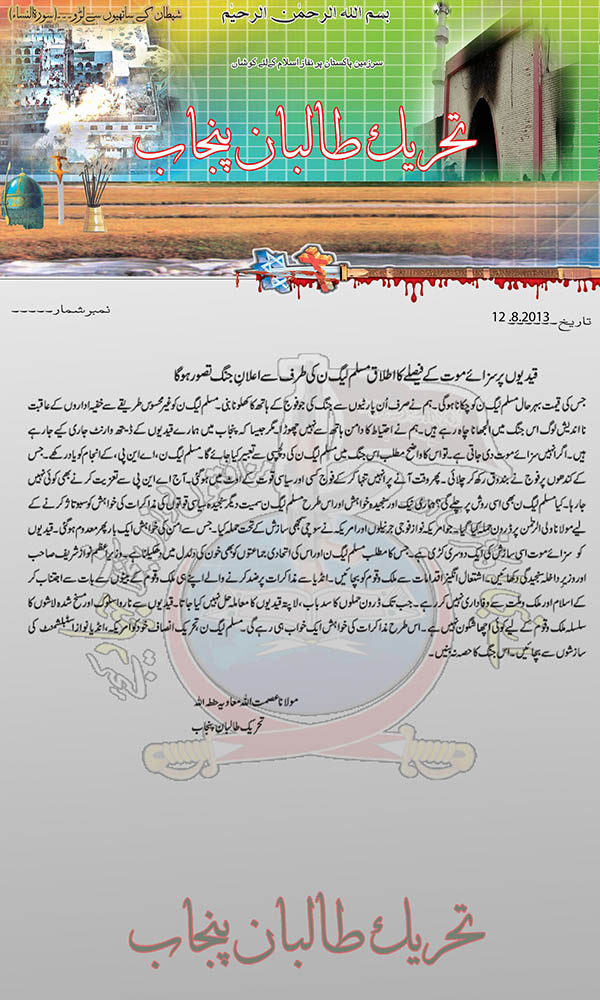 Interesting use of imagery, symbols and the word “khilona (toy)”

Haven’t they already waged war against the government – hence PMLN? How will this be any different?

The Punjabi Taliban network is a loose conglomeration of members of banned militant groups of Punjabi origin—sectarian as well as those focused on the conflict in Kashmir—that have developed strong connections with Tehrik-i-Taliban Pakistan (TTP), Afghan Taliban and other militant groups based in the Federally Administered Tribal Areas (FATA) and North-West Frontier Province (NWFP). They shuttle between FATA and the rest of Pakistan, providing logistical support to FATA- and Afghan-based militants to conduct terrorist operations deep inside Pakistan. Between March 2005 and March 2007 alone, for example, about 2,000 militants from southern and northern Punjab Province reportedly moved to South Waziristan and started different businesses in an effort to create logistical support networks. Given their knowledge about Punjabi cities and security structure, they have proved to be valuable partners for the TTP as it targets cities in Punjab, such as Lahore, Rawalpindi and Islamabad.

Who is the leader of the Punjabi Taliban? Isn’t the organisation the same as the LeJ?