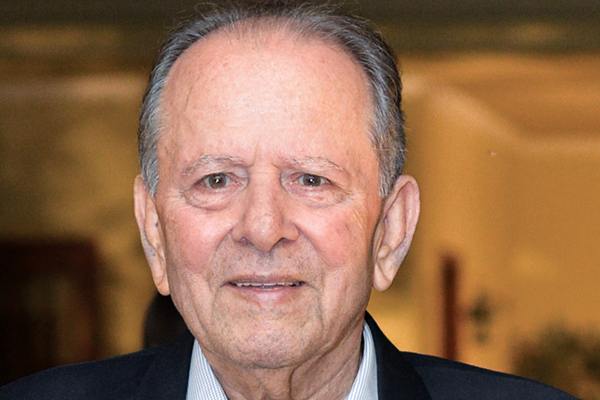 One of Pakistan’s most eminent lawyers and a key member of Zulfikar Ali Bhutto’s cabinet, my father, Abdul Hafeez Pirzada, was a colossus. He passed away on Sept. 1 at the age of 80.

In his professional life, he kept judges and counsels spellbound with his commanding, seasoned knowledge and skillful arguments. At home, he captivated family and friends with his affection, mastery of a multitude of subjects, boyish charm and mischievous humor.

Born in Sukkur in 1935 to Zulekha and Abdus Sattar Pirzada, who served as Sindh’s chief minister, my father began his legal practice in 1957. He married my mother, Sadia, two years later. Their 56-year marriage resulted in four children—Shaziae, Haseeb, Sehr and myself—and five grandchildren—Gibran, Zameer, Mahnoor, Hamza and Eden—all of whom he was devoted to.

My father’s professional achievements had national significance—he was the principal author of Pakistan’s 1973 Constitution and a founding member of the Pakistan People’s Party. He was generous with his insights and experience, serving as beacon for younger lawyers, including myself. He was my mentor, but above all, he was also my closest and dearest friend. In the countless hours we spent together as lawyers, we would debate endlessly about the law and politics, collaborate on finding solutions to our joint cases, and would often end up in heated arguments over our differences in approach over a situation.

Law and politics, however, could not draw him away from his indigenous roots and, quintessentially, he was a son of the soil. For well-earned breaks, my father had two favorite retreats: his agricultural estate in Badin—where he grew cotton, chili, sugarcane and other crops and reared livestock; and where he was often joined by my sister Sehr—and Rose Court, his home in West Berkshire with its vast grounds and babbling brook, where he spent time with my sister Shaziae. He loved a good hunt, and there was scarcely a moment when he wasn’t planning his next shoot in Sindh or in the U.K. My brother, Haseeb, shared this passion with him.

Abdul Hafeez Pirzada was a man of compassion and empathy, a champion of justice for all. Wherever he went and whomever he met, he never hesitated to help, which was an unequivocal manifestation of his single greatest characteristic, his humane heart. He was a man of his time and yet also always ahead of it. Just weeks before his passing, he had ably argued matters of public importance in court and remained at the peak of his profession. When his time finally came, he went with peace and honor, in the manner he had always wished: with his boots on.

Pirzada is a barrister-at-law and head of litigation at Hafeez Pirzada Law Associates, Karachi. From our Oct. 10-17, 2015, issue.

No doubt he was the best lawyer this country had. He was my favourite. May Allah rest his soul in peace.

I had the honour of meeting great Hafeez Saheb. May Allah rest his soul in eternal peace. He was so kind to me. He was fascinating. Sindh in particular and Pakistan in general suffered a great loss by his departure to the ultimate destination.

Mr. Pirzada was a great man. He had high intelligence, strong analytical and advocacy skills, and an ability to communicate effectively. His personality always had an aura in court while he argued his case. I had an opportunity of working with him on some cases and used to also meet him frequently at the Supreme Court. He had a warm personality and was very affectionate to junior lawyers. One of his habit was to appreciate work done by junior lawyers, who assisted, him in open court after he argued his case . He will surely be missed.

He was a good man: a good friend, a good father and he had a presence about him that set him apart from other men. He had a sense of history, an accomplished politician, with many achievements to his name for the good of the Country.Yet he was humble, soft spoken and kind.
He will be sorely missed.

You’re a lucky son! The legacy should live on!

He was really a gr8 lawyer of Pakistan.His contribution in the field of law in country is appreciable..

A true specimen of a gentleman, I have known him for last 24 years. A very learned person and a very good friend, who was always at ease with himself and with people of any age n background. I have lost a loving brother n a great friend.

No doubt He was great son of Sindh Darti, a true man .

He was a brilliant man, May he rest in peace. He helped many people out of the goodness of his heart, including me. What a beautiful tribute to your amazing father. Do him proud in life.

He was a thorough gentleman and a brilliant lawyer. And a handsome man as well. My late father spoke highly of him. He knew him while posted in Sindh in mid 70s.