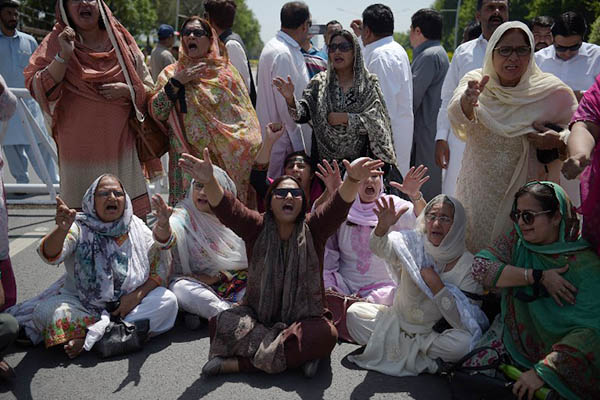 On April 13—Friday the 13th—the Supreme Court of Pakistan decided that ex-prime minister Nawaz Sharif, controversially disqualified from office last year, would not be able to contest elections for the rest of his life. Per the ruling, any politician that falls foul of Article 62(1)(f), a remnant of the judicial irrationality of General Zia’s Islamizing dictatorship that compares lawmakers to the pristine character of Islam’s Prophet, is declared unfit for office in perpetuity. For many, the ruling was comeuppance for Sharif, who refused to remove the offending article from the Constitution despite having the parliamentary numbers to pull it off. Now he is gone from national politics because he is not “sadiq” (truthful) and “ameen” (trustful) like Islam’s Prophet.

First, he was removed from prime ministership through the Panama Case, involving money laundering via offshore companies. The court, which was considered hostile by his Pakistan Muslim League (Nawaz), started a case-building process through a Joint Investigative Team that included officers of the Inter-Services Intelligence and Military Intelligence, and then got a National Accountability Bureau court to try him in cases that could land him in jail in addition to disqualifying him as a future prime minister. He was finally removed by the Supreme Court on the basis of a controversial “iqama” (residential permit in the Gulf States) payment, which he neglected to mention in his tax returns. The media was against him and the professional legal opinion was divided, including among the country’s top lawyers, S.M. Zafar and Wasim Sajjad, who thought the court had crossed valid limits.

There was disagreement over whether Article 62(1)(f), which mentioned no limit to the ban on office, could be interpreted to mean “disqualified for forever” while Article 63(1)(g) stipulates that “a person convicted of a crime of moral turpitude and sentenced to jail for not less than two years can contest elections if five years have lapsed since his release.” A trigger-happy Supreme Court, armed with its “suo motu” power under a garrulous chief justice, has decided to get rid of Nawaz Sharif forever.

The political parties that could be affected by the verdict don’t seem to care as long as their rival has been pulled down from his seat of power. One big factor was the generally accepted “fact” that the “military establishment” didn’t want him around because of his pro-India policy, as spelled out in his party’s 2013 elections manifesto. Earlier, during rosier times, Sharif himself allowed disaster to befall his rival Pakistan Peoples Party when it fell out with the Army. With this latest downfall of Sharif, Pakistan’s political stability, it seems, has finally entered its nadir. How much further it’ll fall remains to be seen.