Explosion at Wholesale Market Near Islamabad 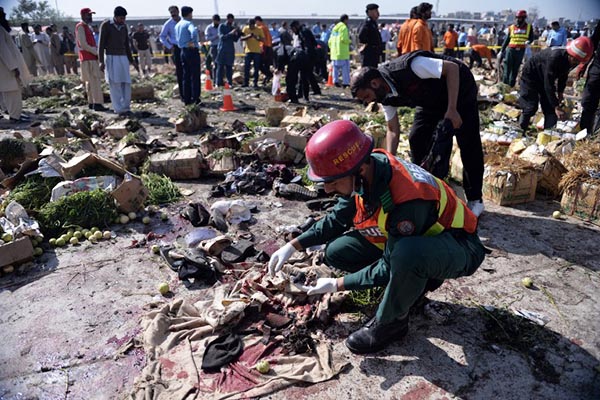 At least 23 dead, over 30 others injured in early morning bombing.

At least 23 people were killed and over 30 others injured when a bomb detonated at a fruit market in Rawalpindi early Wednesday morning.

The blast took place at a wholesale fruit and vegetable market in the busy morning period. Located at the edge of twin cities Rawalpindi and Islamabad, the market was not a known target and had not been threatened in the past.

Shortly after the blast, law enforcement authorities cordoned off the area and started a search operation for the people responsible. “It was an act of terrorism,” said a local police official. He said explosive material had been planted in a crate of fruit and may have been detonated remotely.

“Over 10 people were killed and over 30 injured,” a senior administrative official said, adding, “We are examining the nature of the blast and relief activities have already started.”

The dead and injured were rushed to the Pakistan Institute of Medical Sciences (PIMS). Dr. Ayesha Isani, the hospital spokeswoman, told journalists: “So far, at least 15 dead and 35 injured have been brought to the hospital.” She said nearly half of the injured were currently in critical condition. “Almost all the injured and deceased are adult males, with many exhibiting head injuries. The bodies have been shifted to the mortuary and preserved,” she added. Dr. Javed Akram, a senior doctor at PIMS, amended the death toll: “The death toll has risen to 23,” he said. “There are over 30 injured, several with amputated limbs and shrapnel in their wounds,” he added.

“Around 1,500-2,000 people were at the market at the time of the blast,” inspector general of police (Islamabad) Khalid Khattak told journalists. “Explosives weighing around 4 or 5 kg were used,” he added. The police chief said it was not humanly possible to check every individual who visited the market, adding that the attacker had targeted a particularly busy time early in the morning.

Prime Minister Nawaz Sharif and President Mamnoon Hussain, in separate statements, condemned the blast. The president expressed “sympathies with the bereaved families” and has called upon the authorities concerned to ensure provision of best medical assistance to the injured.

Pakistani Taliban spokesman Shahidullah Shahid has denied any role in the Rawalpindi blast. In an email statement, he said: “It is tragic that innocents have been killed in attacks on public places. Such attacks are haram [unlawful].” Condemning the blasts at the Rawalpindi fruit market and the Sibi railway station in Balochistan, he claimed that hidden elements were responsible. “The TTP remains committed to its ceasefire,” he said, adding that recent attacks in Lahore and Peshawar that had been blamed on the TTP had actually been carried out by other parties.

The United Baloch Army (UBA), one of several armed separatist groups in Balochistan, claimed responsibility. The same group also claimed responsibility for a bomb blast on a train on Tuesday, which killed 13 people in Sibi. “We carried out the attack in Islamabad in response to the military operation against us and we will launch more such attacks in other cities,” said UBA spokesman Mureed Baloch.

The Frontier Corps (FC) began an operation against insurgents early Monday in the Kalat district in which up to 40 insurgents were killed.

A spokesman for U.N. chief Ban Ki-moon said: “The Secretary-General deplores the recent terrorist attacks in Pakistan, including today’s bombing of a market in Islamabad and yesterday’s attack on a train in Balochistan, incidents that led to killing and wounding of many people.”