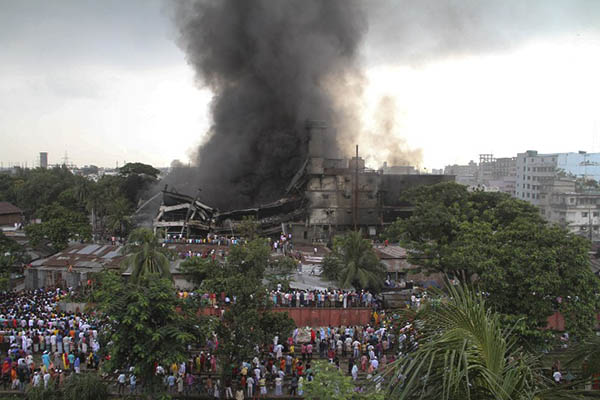 At least 15 people dead, another 70 injured in flames resulting from boiler explosion at packaging factory.

At least fifteen people have been killed and 70 injured, many critically, in a huge fire triggered by a boiler explosion at a Bangladeshi packaging factory, officials said on Saturday.

“The death toll has risen to 15 and at least 70 people have been injured,” said Parvez Mia, a doctor at the Tongi state-run hospital. “Most of them had burn injuries. We sent the critically injured victims to the hospitals in Dhaka,” he said. “Several of them are very critical,” he added.

Around 100 people were working when flames tore through the building following an explosion in the boiler room at the four-storey factory in the industrial town of Tongi, just north of the capital Dhaka. Police say they are concerned many workers may still be trapped inside the building as the fire spread very rapidly, making it hard for people to escape.

“The fire is still not under control,” said police inspector Sirajul Islam.

Chemicals may have been stored on the ground floor of the factory, helping to explain how the blaze that began at 6 a.m. spread so fast, said Tahmidul Islam of Bangladesh’s industrial police unit. “What we have heard is that there were chemical stored on the ground floor. As a result, the fire took no time to spread,” Islam told AFP, adding scores of fire officials were still battling to bring the blaze under control.

The factory produced and printed the plastic packaging for food items like potato chips and small household goods including mosquito coils.

Fires and other accidents are common in the factories that make up the $27-billion garment industry in Bangladesh, the world’s second-biggest apparel exporter after China. In November 2012, at least 111 workers were killed when a devastating fire engulfed a nine-storey garment factory in the Ashulia industrial area, outside the capital Dhaka.

The accident was followed by an even bigger tragedy six months later when 1,138 people died after another clothing factory complex collapsed, trapping over 3,000 workers. The Rana Plaza tragedy triggered international outrage and put pressure on European and U.S. clothing brands to improve pay and conditions at the factories that supply them.

Fires in garment factories have dropped from 250 in 2012 to just 30 in 2015, with no fatalities that year, according to Bangladesh fire department figures. But thousands of local factories supplying the domestic market have done little to address safety concerns. Workers are often crammed in elbow to elbow, while fire escape stairwells are routinely blocked or padlocked closed, ostensibly to prevent theft. Building regulations are rarely enforced and volatile chemicals are often improperly stored, while official safety inspections are few and far between.