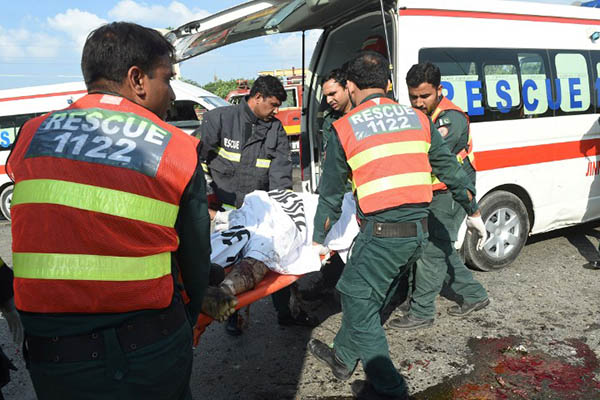 An explosion claimed by the Pakistani Taliban killed at least 26 people and injured dozens in a busy vegetable market in Lahore on Monday, officials said.

The powerful blast hit Ferozepur Road near the Arfa Karim Tower and blew out windows in nearby buildings. “A suicide bomber of Tehreek-e-Taliban Pakistan used a motorcycle bomb to kill dozens of policemen,” TTP spokesman Muhammad Khurasani said in a statement emailed to local media. “Our message to frontline allies of enemies of Islam is to get out of our way or be ready to suffer this fate,” he added.

Initial police investigations suggested it might be a suicide bomb attack. “Apparently, according to our initial findings, he was a suicide bomber, who used a motorcycle,” deputy chief of police operations for Lahore, Haider Ashraf, told reporters, adding that at least 10 police officers were among the dead. The city’s commissioner Abdullah Khan Sumbul said the blast had targeted police.

Senior local administration official Sumair Ahmad Syed put the new toll at 26 dead with over 50 injured. District Emergency officer Ahmad Raza confirmed the death toll, though he put the number of injured at 63.

The area was busy with police at the time because officers had been sent to the market as part of an anti-encroachment bid to clear stalls that had illegally spilt onto the road. Provincial law minister Rana Sanaullah said the blast had appeared to target the vegetable market, which was crowded with shoppers.

Eyewitness Sher Dil, who works at an office close to the site of the explosion, said it blew out the windows of his office building. “I was in my office when it all happened. It was a deafening blast, which shook the entire Arfa Karim Towers,” he said.

Lahore has been hit by significant militant attacks in Pakistan’s more than decade-long war on extremism, but they have been less frequent in recent years. The last major blast in the city was in March last year, when 75 were killed and hundreds injured in a bomb targeting Christians celebrating Easter Sunday in a park. But the country was also hit by a wave of attacks in February this year, including a bomb that killed 14 people in Lahore.

In April a further seven were killed in an attack in the city targeting a team that was carrying out the country’s long overdue census.