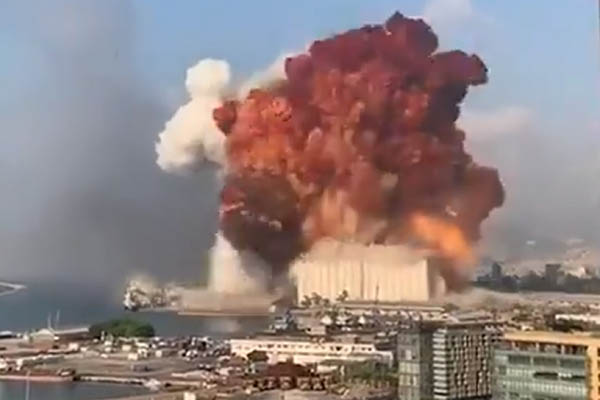 A massive blast tore through the Lebanese capital of Beirut on Tuesday, a city where residents are already beset by an economic crisis amid a global pandemic.

The earth-shattering explosion has killed dozens and injured thousands, causing destruction throughout the city and sending shockwaves throughout the tiny Mediterranean country already beset by multiple economic, security and health crises. According to some reports, the blast’s impact was equivalent to a 3.5 magnitude earthquake with Beirut’s port as the epicenter.

According to Lebanese officials the cause of the blast was the result of fireworks, improperly stored ammonium nitrate, grain silos or some combination of these factors at Beirut’s port. “As far as the Lebanese government is concerned, we have no indication thus far that this was in any way caused by a deliberate attack or bombing of any kind,” Lebanese Ambassador to the United States Gabriel Issa said in a statement to Newsweek. “Initial indications are of a chemical storage massive explosion and investigations are ongoing to determine the cause,” he added.

The blast evoked old traumas, with one resident walking near the suburb of Ain el-Rammaneh comparing it to the 2006 war, when Israel staged air raids. He said he couldn’t explain what just happened but feared for the near future. “I’m really scared this is the start of something much worse,” he told Newsweek.

The U.S. embassy in Beirut said it was “closely following” the situation and warned of “reports of toxic gases released in the explosion so all in the area should stay indoors and wear masks if available.” The top diplomats of rival nations Iran and the United States both offered their condolences in separate statements, as did numerous regional and world powers.

The blast has prompted nationwide calls for blood donations and ambulances as officials gave still-early estimates of least 4,000 injured and potentially rising death toll of at least 100. It also comes at a sensitive time for the country’s internal political situation. Lebanon’s politics are governed by a sectarian system that occasionally devolves into fighting between factions and the National News Agency has reported the death of at least one senior party official, Nizar Najarian, secretary-general of the largely Christian Kataeb Party.