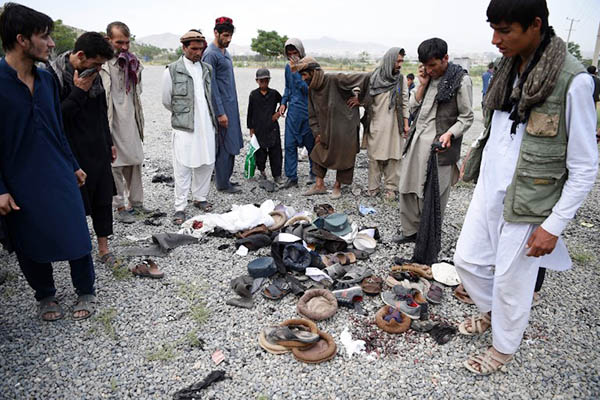 Explosions ripped through the funeral of an Afghan anti-government protester in Kabul on Saturday, killing at least seven people and wounding dozens in fresh carnage that spiked tensions in a city already on edge.

The latest killings, which could provoke a new cycle of bloodshed, bring to 101 the number of people killed this week with hundreds injured in one of the worst bouts of violence in the Afghan capital for years.

Witnesses reported three back-to-back blasts during the burial of Salim Ezadyar, who was among four people killed on Friday when a protest over spiraling insecurity in Kabul degenerated into street clashes with police.

The hilly, wind-swept cemetery was littered with human remains, with one witness telling AFP that “people were blown to pieces” due to the impact of the blasts. “So far seven dead bodies and 119 wounded people have been brought to Kabul hospitals,” health ministry spokesman Waheed Majroh told AFP.

The funeral of Ezadyar, the son of an influential Afghan senator, was attended by senior government figures including Chief Executive Abdullah Abdullah and Foreign Minister Salahuddin Rabbani, but they escaped unharmed. No group has so far claimed the attack, with the Taliban—the biggest insurgent group in Afghanistan—denying any involvement.

The fresh killings are likely to further polarize a city that has been on edge since a truck bombing on Wednesday in Kabul’s diplomatic quarter killed 90 people and wounded hundreds, in the deadliest attack on the Afghan capital since 2001. President Ashraf Ghani made a televised appeal for national unity after the funeral bombings. “The country is under attack,” he said. “We must stay strong and united.”

Wednesday’s assault highlighted the ability of militants to strike even in the capital’s most secure district, home to the presidential palace and foreign embassies that are enveloped in a maze of concrete blast walls. The government has blamed the Taliban-allied Haqqani Network for the attack.

On Friday, the district center again became a battlefield when hundreds of demonstrators incensed by the bombing clashed with police, prompting officials to beat them back with live rounds in the air, tear gas and water cannon.

The tense week of violence during the holy fasting month of Ramzan has left hospitals in the city overwhelmed, with many running beyond capacity to treat the injured. Police on Saturday locked down much of Kabul city, with armed checkpoints and armored vehicles patrolling the streets to prevent a repeat of Friday’s clashes.

Before the blasts at the funeral, authorities had sealed off roads in the center of the city, citing the threat of new attacks on large gatherings of people. “We have intelligence reports that our enemies are trying again to carry out attacks on gatherings and demonstrations,” Kabul garrison commander Gul Nabi Ahmadzai said earlier Saturday. “We hope that people will stay away from protests.”

Dozens of protesters defied the warning and gathered under a tent close to the presidential palace calling for Ghani’s government to resign, but the assembly was largely peaceful. “Any government attempt to disrupt our fair and just demonstration will show their complicity with terrorist groups and the perpetrators of Wednesday’s attack,” said Asif Ashna, a spokesman for the protesters.

The United Nations and a host of international allies have urged restraint by all sides. “The attack today, conducted by those opportunistically seeking to use these very fragile moments to destabilize Afghanistan, follows so much violence this week,” the U.N. said in a statement. “In the context of so much suffering, now is the time to seek unity and solidarity.”