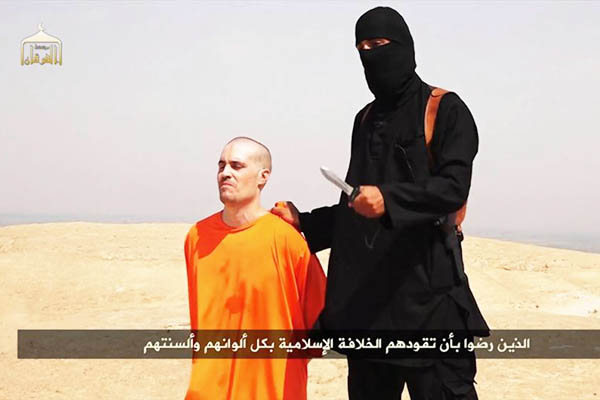 A chilling video depicting the apparent murder of a U.S. journalist by jihadists is just the latest salvo in an online war being waged by extremists on social media sites.

Jihadist groups have long used their own media organizations to distribute messages and videos, but in recent years platforms like Twitter have given them an unprecedented, unfiltered ability to intimidate their opponents and recruit members. Their use of forums like Twitter and video-sharing site YouTube has not gone unchallenged, with jihadist accounts frequently shut down, though many quickly reopen, in a cat-and-mouse chase between administrators and users.

The unverified video purporting to show the brutal killing of James Foley by jihadists from the Islamic State (IS) group appeared on YouTube on Tuesday night. It featured hallmarks of jihadist videos reaching back at least a decade, but unlike images of gruesome killings during the height of the Iraq war, or the 2002 murder of journalist Daniel Pearl in Pakistan, it spread rapidly across the Internet. YouTube quickly pulled the footage, but it was embedded elsewhere, and screenshots flashed across Twitter.

Supporters and members of IS quickly spread the images and defended them, posting pictures of abuses by U.S. troops at Iraq’s Abu Ghraib prison and citing religious precedent for decapitation.

Foley had covered the war in Libya before heading to Syria, where he contributed to news site GlobalPost, Agence France-Presse and other media outlets. But online, jihadists accused him of being a spy, or claimed he deserved to die simply for being an American non-Muslim. He was dressed in orange clothes in the video, as jihadists online pointed out, in a reference to the jumpsuits worn by Muslim detainees at the U.S. Guantanamo Bay facility.

Twitter users online made it clear Foley’s death and the video were intended to spread fear. “IS execution of the American journalist was a deliberate strategy, by showing brutality to the world puts the fear in IS enemies,” tweeted one self-described “extremist” under the name Abu Bakr al-Janabi. “It’s meant to evoke fear, terror and hatred,” he added, writing in English.

In recent years, Twitter and sites like the question-and-answer forum Ask.fm have become prime platforms for jihadists who would have once shunned such public exposure. Jihadists have even used hashtags like #Hawaii and #Ferguson to capitalize on attention being paid to U.S. news stories.

“Terrorism by its very definition is a communications strategy,” said Max Abrahms, a political science professor at Northeastern University. “In a way … use of social media shouldn’t be that surprising because this is 2014 and everyone uses Twitter.”

But he said IS had demonstrated a mastery of social media that far exceeded that of groups like Al Qaeda. That strength is partly a result of the growth of social media in recent years but also the work of the young and often Western-educated recruits who join IS. “These Westerners have a leg up in terms of exposure to social media and frankly their English skills are much better for reaching out,” he said.

For IS, which grew out of the ashes of Al Qaeda’s former Iraqi affiliate, grisly postings on social media have become a way to “project strength” and attract recruits, Abrahms said. “It repels most people in the international community, but does have some appeal among already radicalized segments.”

Jihadist use of social media platforms has not gone unnoticed by administrators, and Twitter had begun suspending accounts of some extremists even before the Foley video was published. After it was released, Twitter CEO Dick Costolo announced that the company would suspend accounts posting graphic images from the video. YouTube also quickly removed the video for violating its terms of usage, though it remained online on other sites.

Twitter users themselves sought to stop the spread of images from the video, using the hashtag #ISISmediablackout to urge people to avoid giving the group publicity. “I won’t share any photo or video of violence intentionally recorded and released by ISIS for propaganda,” wrote user Hend under the name Libya Liberty. “Amputate their reach. Pour water on their flame,” she added.

But it remains unclear how effective such attempts will be. By Wednesday afternoon, several suspended Twitter users were back online under different names. “New account LOL spread the word. ‘These terrorists keep coming back,’” one user wrote.