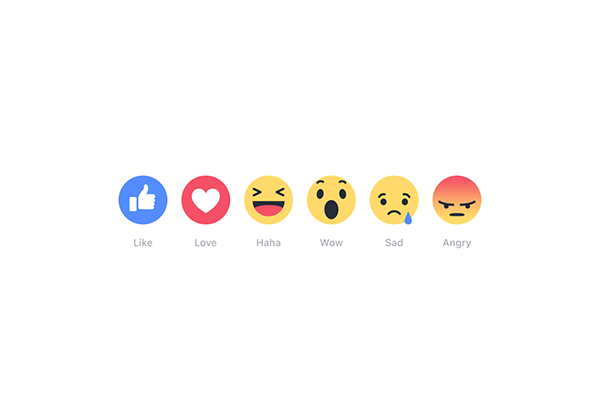 Feeling outraged, tickled or touched by something you spotted on Facebook? Now you can say so, after the social media giant added five new reactions to its basic “like” button.

“Like, love, haha, wow, sad or angry”—the expanded “reactions” feature rolled out globally on Wednesday is designed to let users show a range of emotions.

Notably absent from the new emoticons is a “dislike” button, something sought for years by Facebook users, but which has been ruled out by the California company to avoid a barrage of hateful expressions. “I’ve spent a lot of time thinking about the right way to do this with our team. One of my goals was to make it as simple as pressing and holding the Like button,” Facebook founder Mark Zuckerberg said on his page, immediately drawing tens of thousands of “like,” “love” and other expressions.

“Not every moment you want to share is happy. Sometimes you want to share something sad or frustrating. Our community has been asking for a dislike button for years but not because people want to tell friends they don’t like their posts. People wanted to express empathy and make it comfortable to share a wider range of emotions.”

Facebook had been testing ways to add to the “like” button faced with complaints that it was sometimes inappropriate, especially in cases of tragic events. “We’ve been listening to people and know that there should be more ways to easily and quickly express how something you see in News Feed makes you feel,” product manager Sammi Krug said in a blog post. “That’s why today we are launching Reactions, an extension of the Like button, to give you more ways to share your reaction to a post in a quick and easy way.”

The familiar “like” button with a thumbs-up image will still be there, alongside the new emoticon icons. “We understand that this is a big change, and want to be thoughtful about rolling this out,” Krug said. “For more than a year we have been conducting global research including focus groups and surveys to determine what types of reactions people would want to use most.”

The expanded reactions feature had been tested in several markets and is now rolling out globally, Krug added.

The new reactions buttons were unveiled in October as a test project for Facebook users in Spain and Ireland. The new buttons became a quick topic of conversation on Facebook and other social networks, with the hashtag #dislikebutton used by its proponents.

On Twitter, one user wrote, “Thanks @facebook for all the new reactions except for literally the only thing I wanted #dislikebutton.”

In contrast, user Diane Bjorling welcomed the new tools. “As much as I used to want to see a thumbs down button… after seeing how such a button can create conflict.. I am happy with these ‘reactions,’” she wrote.

Facebook member Greg Kreiger said the “angry” button was good enough for him. “To the haters and naysayers who are asking where is a Dislike button: Hover over like and choose ANGRY,” he wrote. “Visually it works better than just having the words Dislike or whatever there. Get over it.”