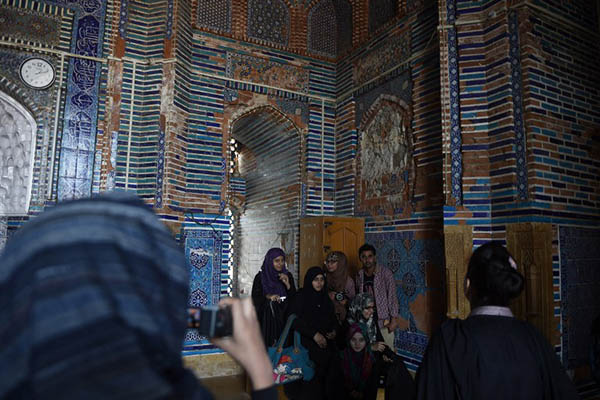 Legend says when construction on Pakistan’s Shah Jahani mosque commenced in 1644, advisers to the Mughal governor told him to find someone “who is so pious that he has committed no sin in all his life” to lay the foundation. Bells rang out with the message, calling on such men to come in the darkness of the night and lay a stone in the grounds of the mosque, which was being constructed on the orders of Shah Jahan, the Mughal emperor best known for building the Taj Mahal.

The next day, 450 bricks were found placed in the foundations at the site in the town of Thatta. “And thus the construction work started taking off,” said Syed Murad Ali Shah, the ninth generation heir to Amir Khan, then-governor of Sindh. “There were hundreds of pious men and saints in those old good times, but there are none today to salvage the mosque,” he said, standing outside the centuries-old structure, its grandeur now threatened by time, exposure, neglect and negligence.

Completed in 1647 by thousands of laborers, the Shah Jahani mosque is a rare example of Pakistan’s Mughal heritage outside of the country’s cultural center of Lahore, with its famous fort and Badshahi mosque.

Thatta was for centuries the historic capital of Lower Sindh, and the central mosque would fill to capacity on Fridays and during Eid. Spanning more than 6,300 square feet, it was famously constructed so that an imam’s voice could travel to every corner without amplification, pinging through dozens of domes lining the corridors surrounding its vast courtyard.

But as Thatta’s importance declined after the 18th century, the mosque too fell into disrepair. Poor reconstruction work carried out in the 1970s by the federal government inflicted irreparable damage to original features including its unique auditory system.

“Many things were replaced during the repair work, and the replacements have ruined the original immaculate work, as well as disturbing the sound system,” said Mohammad Ali Manji, principal of the Government College Thatta. “No conservationist or archaeologist was consulted [for the repair] work, so its originality was badly damaged,” said Qasim Ali Qasim, director of the Sindh Archaeology Department.

The facade of the mosque’s arched entrance was damaged during the repairs, with stones engraved with Quranic verses removed and taken to the National Museum in Karachi then dumped in a junkyard. They were retrieved earlier this year only to be installed in a replica of the mosque’s arch built at the entrance to the museum, a move that enraged mosque prayer leaders who wanted them returned.

Qasim said efforts are being made to drain groundwater threatening the structure of the mosque, which still draws a small number of worshippers.

Fascinated tourists can be seen posing for selfies before the intricate mosaic tiles on the foot-thick walls, slowly being sundered from the red bricks beneath them by humidity. But, Qasim said, despite the mosque’s unique and historic qualities, there are no plans for any further restoration of its fading splendor.