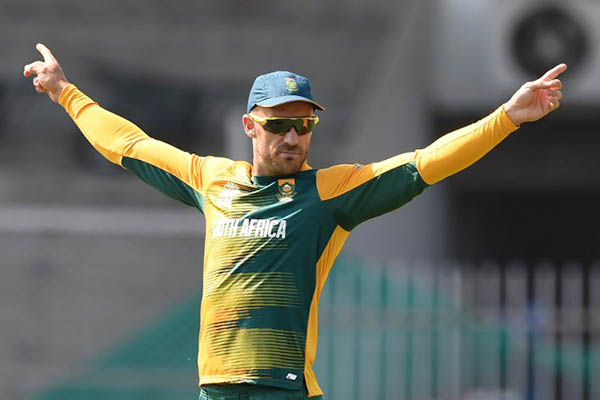 Pakistan Cricket Board (PCB) Chairman Najam Sethi announced the Proteas captain’s participation along with a list of illustrious names from seven Test playing countries. “The World XI will play three Twenty20 Internationals for the Independence Cup against Pakistan in Lahore on Sept. 12, 13, and 15,” Sethi told a press conference in Lahore.

Pakistan has hosted all its international matches in the neutral venue of the United Arab Emirates since. But security has improved dramatically in recent years, giving fans hope that international cricket could finally return, a massive boost in a country where the game is far and away its most popular sport.

Du Plessis, who recently led South Africa on the tour of England, said he was “honored” to tour Pakistan. “All the members of the squad have complete faith and trust in the assessment and judgment of the security experts, who have assured us that there will be no comprise on the safety and security of all those involved in the series,” he said, according to a PCB statement.

Du Plessis said he had played “very exciting” matches against Pakistan in the past, but this would be his first match before a home crowd. “[P]laying Pakistan in front of its passionate supporters will be a unique occasion, which I can’t wait to experience,” he said.

Amla, who visited Pakistan with a Graeme Smith-led side in 2007, said he looked forward to returning, and was “confident” of having recovered from a shoulder injury.

If the World XI tour goes off without problems, Pakistan hope Sri Lanka will also play a Twenty20 in Lahore in October—a match which will be hugely symbolic for the return of international cricket—followed by a three-match Twenty20 series against West Indies in November.

Pakistan captain Sarfraz Ahmed was optimistic: “I am confident that following the success of these matches, Pakistan will host regular international series which we badly need.”