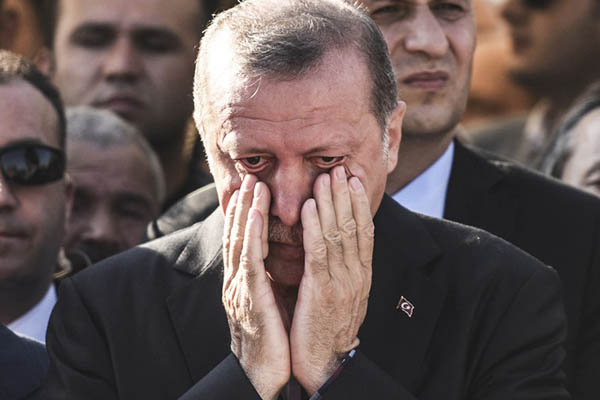 The failed coup attempt in Turkey and President Recep Tayyip Erdogan’s firm crackdown on the alleged plotters have aggravated ties between Washington and Ankara, already poisoned by the war in Syria and human rights issues.

Although they are NATO allies and officially partners in the fight against the Islamic State group, the United States and Turkey have seen their relations take an icy turn in recent months. They have clashed on how to combat Islamist extremists and over actions by Erdogan’s government seen in the U.S. capital as authoritarian.

U.S. Secretary of State John Kerry issued a rather stern call to order on Monday. With European Union foreign policy chief Federica Mogherini at his side in Brussels, Kerry urged Erdogan’s government to “uphold the highest standards of respect for the nation’s democratic institutions and the rule of law.”

It was one in a multitude of warnings from Washington to Erdogan about the need to maintain civil liberties.

After a months-long campaign in Turkey against journalists and Erdogan’s opponents, U.S. President Barack Obama in April warned the Turkish leader was taking his country down a potentially “troubling” path. On Monday, after thousands were arrested in Turkey, Kerry said that NATO, the western military alliance of which Turkey is a key member, would “measure very carefully what is happening” with respect to democracy.

For Matthew Bryza, a Turkey-based senior fellow at the Dinu Patriciu Eurasia Center, Kerry’s statement was “definitely misinterpreted here, perhaps totally unfairly, but misinterpreted as a warning that the United States may push for Turkey to leave NATO.”

Bryza, who was speaking during a teleconference hosted by the Atlantic Council in Washington, predicted a “rough ride” ahead for U.S.-Turkish relations.

“If Turkey were to leave NATO, who would the U.S. replace them with?” Balci said.

Experts say the sticking point in U.S.-Turkish relations for now is the situation of U.S.-based Muslim cleric Fethullah Gulen, who is Erdogan’s archenemy and who has been blamed by Ankara for the deadly unrest. Gulen is the spiritual leader of the Hizmet network, which operates schools around the world and is linked to a number of media organizations, business and think tanks.

Erdogan told CNN a formal request for the extradition of the 75-year-old Gulen would be submitted in the coming days. But State Department spokesman Mark Toner said Ankara would need to provide “evidence” against Gulen.

Aaron Stein, a resident senior fellow at the Atlantic Council’s Rafik Hariri Center for the Middle East, said many senior Turkish officials believed Washington had to take sides—“choose Turkey or choose Gulen.” He predicted a “crisis” in U.S.-Turkish ties and, in the short term, a “significant impact” on Turkey’s participation in the anti-Islamic State campaign.

In July 2015, Ankara—something of an ambiguous ally for Washington—authorized the U.S.-led coalition to use the Incirlik airbase in southern Turkey for air operations against I.S. fighters in Iraq and Syria. The facility is home to 1,500 U.S. personnel, and the U.S. has deployed drones, Prowler electronic warplanes and A-10 ground attack aircraft there.

The base was under a security lockdown Saturday after the failed coup attempt, disrupting anti-I.S. operations. According to pro-government Turkish media, the base was searched. Ankara says Incirlik was used by coup plotters to refuel fighter jets late on Friday.

Veteran British diplomat Peter Westmacott, a former ambassador to Turkey and the United States agreed that while things could be “a bit more complicated for a while,” the long-term outlook was better. “The overall commitment of Turkey to be a part of a united and international effort against Daesh, I hope, will remain unchanged,” he said.