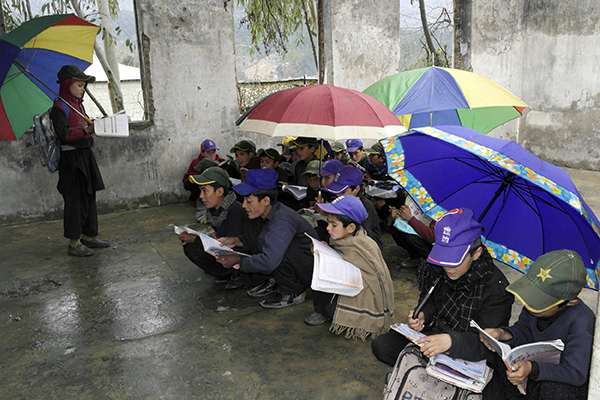 When will Pakistan get a grip on its education crisis?

In the mid-1990s, Muslim intellectuals around the world indicted their states for neglecting education. But no one paid heed because intellectuals were, and remain, suspect in most Muslim-majority states. Conflict and instability have kept Pakistan impoverished and, therefore, neglectful of education. This neglect became habit. Pakistan did little that was lasting for education even when its GDP was growing at 6 percent per annum or higher.

Today, the fruits of this neglect are manifest. According to a recent report by the Islamabad-based Sustainable Development Policy Institute, over 80 percent of the schools in Pakistan are of the primary level, i.e., up to Grades 3 and 5. This identifies a key aspect of the education crisis here: a big dropout rate because of the dearth of secondary and high schools.

The press has been highlighting the infrastructure and corruption problems plaguing the education sector for years without much effect. Far and wide across the land, there are schools where there are students but no teachers, schools where there are far more students than classrooms, schools that have no students at all but still manage to get funds from the state, schools that have no power and force young children to sit out in the sun even during summer, schools without boundary walls or toilets.

Only last week, one teacher in Karachi was caught selling textbooks supplied for free distribution among the children. Last year, Balochistan’s then-chief minister, Dr. Abdul Malik Baloch, had owned up the province’s 900 ghost schools and 300,000 bogus enrolments in the public sector. In Sindh, 60 percent of schools are without drinking water, 40 percent without electricity, and 35 percent without boundary walls. The scandal of 40,000 ghost teachers and 5,229 ghost schools shocked the world last year; and the province is still busy getting rid of fake teachers recruited by politicians to eat up the Rs. 145.02 billion set aside for education.

Only two regions in Pakistan were always showcased as being good in the education sector: Khyber-Pakhtunkhwa and Pakistan-administered Kashmir. But notable troubles afflict those two showcases as well. The Taliban had been bombing and blowing up schools in the north and exposing school-going boys to suicide-bombing training. And the 2005 earthquake wrecked the education setup in Pakistani Kashmir.

Speaking at the Lahore Literary Festival (LLF) in New York earlier this month, Syed Babar Ali, the businessman-philanthropist who set up the Lahore University of Management Sciences (LUMS) and the Ali Institute of Education for teacher training, remarked, “You’re not doing the people justice if you spend less than 8 percent of GNP on education.” Ali’s latest initiative aims at eradicating malnutrition by providing balanced meals to schoolchildren. He sees investment in education and health, another egregiously underfunded sector, as the key to national prosperity. “Malnutrition is a serious problem and prevents proper brain growth. We have to focus on health,” he said. Ali remains unimpressed with the government’s spending priorities. “The yellow train, the red bus, the F-16s won’t take you anywhere unless there is education.”

Pakistan ignores this advice at its own peril.