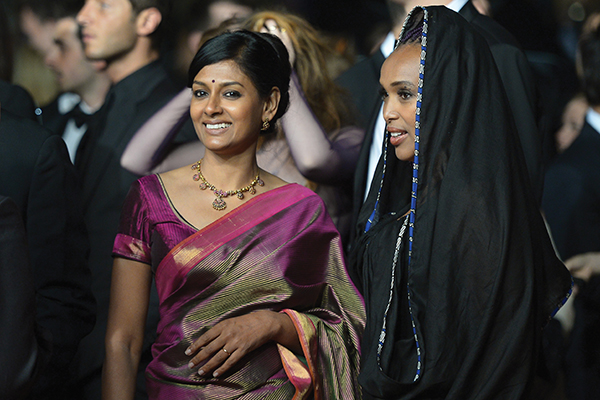 An Indian actress spells out the black and white of discrimination.

Since March, Bollywood actress Nandita Das has been appearing in a print ad campaign that urges Indian women to challenge the longstanding social prejudice against dark-skinned women. We spoke with Das about this work recently. Excerpts:

How did you get involved with the Women of Worth organization and its much-buzzed-about “Dark is Beautiful” campaign?

Kavitha Emmanuel, the director of the organization, asked me to lend support. I was glad to since discrimination is rampant across class, religion, and gender. I am happy [the campaign] has created a debate. This should have happened many years ago.

What goals have been set for the campaign?

Its message is: Be comfortable in your own skin, even if the world around you tells you that you are not good enough if you are not fair. We should be defined by what we do, how we think and respond to situations—not by things like caste, religion, nationality or the color of our skin; these are things we have no control over, so why feel proud or ashamed about them? The campaign is trying to draw attention to the obsession [in South Asia] with fairness and how this is destroying the self-esteem of millions, especially young girls. We can’t afford to be cynical. Every step which creates awareness, empowers people, initiates honest dialogue about important social issues can only be good. I have always talked about this at many forums, formally and informally, and will continue to do so. This media interest will not last forever nor will the campaign, but it would have triggered a debate that will have many tangible and intangible repercussions. I already see the ripples. To change a mindset takes time, but every little step counts.

I had no idea this campaign would go viral. I was also clueless about the buzz it generated since I am not an avid social-media user. I have been getting tons of email from women sharing their stories of discrimination, who feel validated by this campaign. The response has truly been overwhelming. I think the time has come to question this complex that we have about our skin color.

Does Bollywood perpetuate the bias toward fairer-skinned actresses?

Mainstream cinema, by its very definition, wants to appeal to the maximum number of people. If the society itself is deeply biased toward fair skin then obviously [popular culture] will reflect that same bias. Films, TV soaps, ads can play an important role in not further stereotyping the ‘beautiful.’ Fairness should not falsely be associated with success, love, marriage, and overall acceptability by the world. Things have gotten worse with the proliferation of fairness products—even from multinationals. There are many songs that equate fairness with beauty and pretty much all the heroines in Bollywood have been fair skinned.

Where does South Asia’s obsession with fair skin come from?

There are many theories for this. But the one that seems most plausible is that for centuries the upper class has been fair, and the working class dark. The former works indoors and has had the best nutrition while the latter toils in the sun and is underprivileged in many ways. Mixed marriages led to greater diversity. But instead of celebrating this diversity, we, as a nation, have become obsessed with being fair skinned, as that seemingly represents power, wealth, and privilege.

Has your skin color deprived you of opportunities in Bollywood, and have you faced any pressure to lighten your skin?

I have always been very outspoken about this issue and by default have become a champion for it. Commercial cinema is not for me, for many reasons, and one of them is the stereotyping of most things. Some actors were somewhat darker than the rest in their first films, but all of them are fairer now. The pressure to fit in is enormous. When I have played educated, affluent characters, I have often been asked by the director or cameraman or make-up man to lighten my skin. Their logic is that this class of people is always fair in films. I have always stood up against this stereotype. If they wanted a fairer woman for the part, then they cast the wrong girl.

How desperate is the bias against duskier complexions in India?

It is pretty bad. It has reached bizarre levels: there are vagina washes to make a woman’s private parts fairer for the husband. How much worse can it get? Virtually every skincare product is marketed on the basis of how it will help you get fairer. The real dangerous message is that only fairness will make you loved.

What and how long will it take to shift South Asia’s sense of what is beautiful?

Present-day aesthetic sensibilities are a manifestation of the lack of respect for women as individuals. As long as women are objectified, they will be forced to buy into this storyline that they will only have better chances in life if they were whiter or thinner or prettier. Too many young girls, and even boys, are losing their confidence because of this objectification. There is an urgency to change this scenario. Campaigns like “Dark is Beautiful” will change things, but slowly.

How much are Bollywood and ad agencies to blame in this?

Films and ad companies are only cashing in on the dark-skin complex that exists all across the country. While none of us has the right to dictate how others should behave, one can’t help but wish that the images we see around ourselves would be truly representative of real-world diversity. I do wish that people in influential positions would use their power to make people feel better about themselves and not inadequate. Those who control social representations can stand to be more responsible.

What is your definition of beauty?

If you are happy, it shows. To me, sparkling and honest eyes and a genuine, heartfelt smile are attractive elements of beauty. So be yourself, be comfortable in your skin. Don’t let anybody rob you of your self-esteem. Focus on your interests and talents and do things that make you happy, instead of making your looks the focal point of your identity. Let your attitude and behavior define you.

Nandita is so beautiful. So good to know she’s never succumbed to the nonsense that is fair and lovely. These creams are so bad for your skin.

This is certainly a highly appreciable initiative. I hope this message gets across all those who are either ashamed of or forced to be ashamed of their dark skins.

Nandita’s efforts in this initiative has been nothing short of remarkable. This article tactfully covers all she has, and seeks to, accomplish.

It’s unfortunate, though, that our culture constantly succumbs to such insecurity.
Our once luscious cultural garden is dying and Nandita is trying to restore it one plant at a time. But first we must learn to love our roots.

WE NEED TO BOYCOTT THESE PRODUCTS. I’m glad someone in Pakistan has picked up on this. Thanks Newsweek Pak because there are so many Pakistanis buying these chemical toxins to bleach their skin which basically takes off your skin.

An eye-opening social commentary on the depths to which we’ve sunk. This madness prevails in Pakistan as much in India. Keep up the great work, Rimmel Mohydin; hope your interviewees stay as fresh and interesting.

A Celebrity like Nandita has shown the courage to Stand up for this Cause!!!. She is truly WOW and a trendsetter for millions of ladies who suffer in silence.

Love Chocolate so much….

And don’t forget the saahs-bahu serials such as “Qubool Hai” and others, which show that if a girl is dark, it is harder to find a good proposal for her. Nonsense! Boycott these serials perpetuating this nonsense to our dark and proud Indian women!!!!!!!!