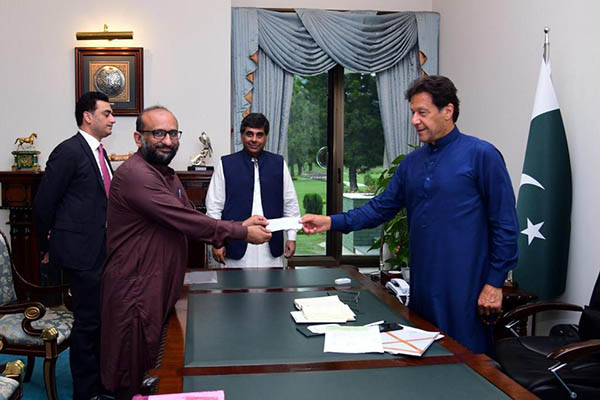 Faisal Edhi, the chairman of one of Pakistan’s largest privately run charity organizations, has tested positive for the novel coronavirus, his family told media on Tuesday.

Edhi, a resident of Karachi, had last week traveled to Lahore and then the federal capital Islamabad where he met Prime Minister Imran Khan and donated Rs. 10 million for the government’s Corona Relief Fund on behalf of the Edhi Foundation.

His son, Saad Edhi, told local media that Faisal had started to exhibit symptoms of the virus shortly after meeting the prime minister on April 15. “The symptoms lasted for four days before subsiding,” he said, adding that his father was currently asymptomatic.

According to Saad, his father had opted to get tested because he had been working with patients who had tested positive for the coronavirus and did not want to risk spreading the virus by continuing his work. He said the test results had come back positive today (Tuesday).

Faisal Edhi remains in Islamabad and per his son shows signs of improvement. He said that the charity worker had not been admitted to hospital and was self-isolating.

Everyone who has come into contact with Edhi, including his family, will be tested for the coronavirus, Saad said.

Pakistan currently has 9,219 confirmed cased of the coronavirus, with 192 deaths and 2,066 recoveries. Overall, the country has 6,961 active cases of the deadly disease.