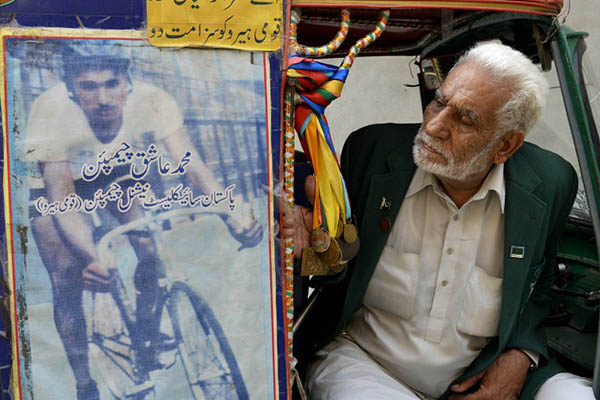 Muhammad Ashiq has gone from Olympics glory in the 1960s to driving a rickshaw in Lahore today.

Former Olympian Muhammad Ashiq looks daily at the trophies he won in a glittering cycling career for Pakistan decades ago. “Perhaps most people think that I have died,” he laments. “I just recall that I have shaken hands with… former Pakistani prime ministers, presidents, chief executives,” the 81-year-old says tearfully. “Why and how they all forgot me, I cannot believe.”

Ashiq, who competed for Pakistan at the 1960 and the 1964 Olympics, now scrapes by as a rickshaw driver in Lahore. He began his sporting career as a boxer, switching to cycling in the 1950s when his wife complained about his injuries.

He competed in Rome in 1960 and Tokyo in 1964 and though he won no medals, he was hailed as a national hero for Pakistan. “I was so happy… I considered myself lucky to represent Pakistan in the Olympics,” he says.

But when his cycling career ended, so did his luck. He took a public relations job but left it for health reasons in 1977. He briefly drove a taxi and a van then bounced around several other small business ideas, but for the last six years has been reduced to driving a rickshaw, ferrying low-income passengers around Lahore’s bustling, choked streets.

He lives in a 450 square foot house on which he owes more than one million rupees ($9,500)—a near-insurmountable amount, given his rickshaw salary of roughly Rs. 400 per day. His wife has passed away, and his four children no longer live with him, he says, adding he does not want to be dependent on them.

He used to hang his medals in his rickshaw, but not anymore.

Instead, the canopy is inscribed with a twist on the famous quote by former U.S. President Calvin Coolidge: “Nations and states who forget their heroes can never be prosperous.”

When passengers ask him about the message, he says he tells them his story—using it as a cautionary tale for the poor in particular, whom he warns never to take part in sports.

His wife and four children begged him over the years to stop thinking about his fall in life, he said. “Once my wife started weeping. I asked her why… She said she was just worried about my health. She told me to be happy all the time and forget those who forgot us. I said OK, and she became happy for a while. And after some period, she died.”

That was two years ago. Now, he says, his hands shaking, he too prays for death. “I pray… to meet my beloved wife in heaven. I think it is better to avoid this pathetic situation I have endured,” he says.