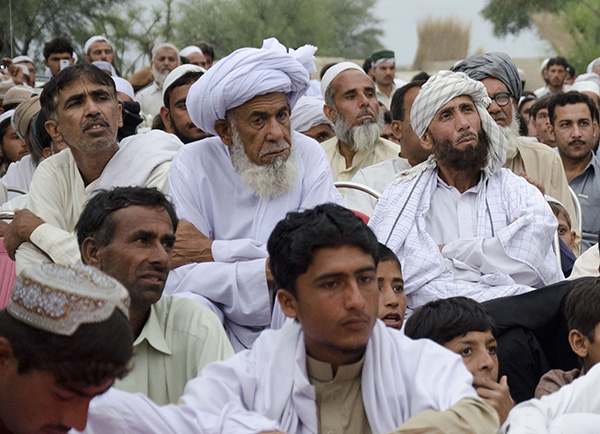 Brothers Salim and Anwar are contesting for Parliament from separate political parties.

Pakistan’s two main parties may be tearing strips off each other in election campaign adverts, but in one district of the country’s northwest they are united in brotherly harmony.

In Khyber-Pakhtunkhwa province’s Lakki Marwat, next to the Taliban-infested badlands bordering Afghanistan, the Saifullah family comprises tribal leaders and wealthy industrialists who have been in politics for four generations. The vast majority of the 330,000 registered voters are members of the Marwat tribe and locals know the Saifullah brothers as their clan elders, not for their party affiliations.

Salim Saifullah Khan is running for the National Assembly on a ticket from the Pakistan Muslim League (Nawaz), favorites to win the May 11 poll, while his brother Anwar is contesting two provincial seats for the Pakistan Peoples Party. They share a campaign base, the family house in Ghazni Khel village, they appear on campaign posters together and the slogan “Saifullah brothers” is daubed on countless walls in the district.

In this deeply traditional land of dry earth and ragged, rocky hillsides, what counts in politics is not party or policies but service and tribal kinship, and the Saifullahs are tied to the people by ancient bonds of blood and loyalty.

For Abdul Hamid Khan, an elderly voter in the village of Shahbaz Khel, PMLN leader Nawaz Sharif and President Asif Ali Zardari of the PPP are unimportant. “We don’t know Nawaz, we don’t know Zardari, we only know our Khans,” he said.

The family has a successful group of companies and has ploughed some of its wealth back in to improving the district. A cement plant the family helped set up is the biggest single employer, providing jobs to 2,000 people. “We are Marwat, they are our princes and we are their nation,” said Mehmood Khan Haji, another voter.

But Salim, a former cabinet minister, has a tough fight on his hands as he seeks to take over his eldest brother Humayun’s seat as he is retiring. He is running against the cleric Maulana Fazlur Rehman, national leader of the religious Jamiat Ulema-e-Islam (Fazl) party, whose conservative message plays well in the deeply pious area, where women are rarely seen in public.

“We’ve worked here for the last 80 years, my grandfather first got elected in 1936 and we have been working ever since,” said Salim. “I hope my constituents, who we have served for the last so many years, look at our services and look at [Rehman’s] services, which are negligible, and hopefully will vote for me.” Rural voters expect personal attention from their Khans, and Salim is pounding the trail for up to 15 hours every day to get his message across.

In Shahbaz Khel, a crucial battleground with a vote bank of around 4,500 where Salim admits he is neck and neck with Rehman, around 100 villagers—all men—receive the 65-year-old. An elder appointed as spokesman welcomes Salim and pledges the village’s loyalty, but says the Saifullahs should do more for the people, give them more time, and listen more to their grievances.

The family says the relationship with the people has changed since earlier generations. Voters’ loyalty is no longer unquestioning and they expect more from the family. For the Saifullahs, as for other wealthy dynasties that dominate rural Pakistan, hearing personal petitions is vital to maintaining political support. “Every morning there are hundreds of people who would like to meet us—they want jobs, they want transfers, other issues that they have, health issues, they want drinking-water schemes for their area,” explained Salim.

After reminding the people of Shahbaz Khel of his family’s service and warning them of the dangers of electing an outsider like Rehman, Salim spends several hours patiently hearing the often-fervent pleas of dozens of villagers.

Employment is a big concern in an area with a young and rapidly growing population and a common request is for work at the Lucky Cement plant that the Saifullahs helped found in the 1990s.

Saifullah Khan Mahsud, executive director of the FATA Research Center think tank, said there was no question the family had helped the area, but he warned their Western education and liberal lifestyle could work against them. He said the fight between Salim and Rehman was too close to call but the brothers would probably win at least one of the seats they are contesting.

Salim’s goal before he retires is to see through a new dam on the Kurram River, which would generate 85 megawatts of electricity. More importantly in an area of dusty soil, thin crops and little drinking water, the dam would help irrigate more than 200,000 acres of farmland.

“My one wish is Kurram Tangi. When I have done that I can say to people: ‘You have voted me and I have delivered.’”