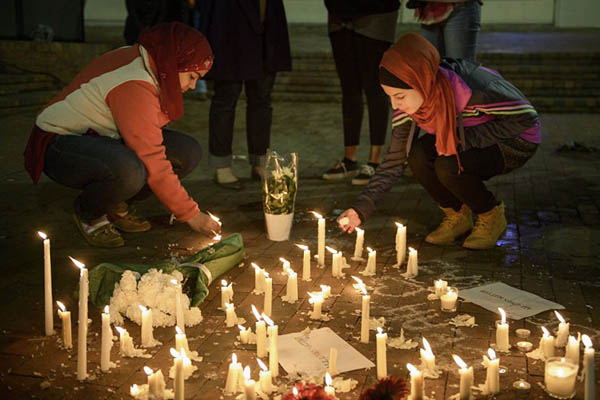 The families of three murdered Muslim students called for the horrific triple-homicide to be investigated as a hate crime on Wednesday as U.S. police indicated a parking dispute had triggered the killings.

Deah Shaddy Barakat, 23, his wife Yusor Mohammad, 21, and her sister Razan Mohammad Abu-Salha, 19, were shot dead execution-style on Tuesday in the peaceful North Carolina university town of Chapel Hill. A 46-year-old neighbor, Craig Stephen Hicks, has been charged with three counts of murder over the killings, which sparked outrage amongst Muslims worldwide.

Police said Wednesday they believed a parking dispute was the catalyst for the attack but added they had not ruled out the possibility that hatred of Muslims had motivated Hicks. “We understand the concerns about the possibility that this was hate-motivated and we will exhaust every lead to determine if that is the case,” Chapel Hill Police Chief Chris Blue said.

The carefully worded statements of investigators contrasted sharply with the anguished reaction of the victim’s families, who insisted police treat the killing as a “hate crime.”

“This was not a dispute over a parking space; this was a hate crime,” said Mohammad Abu-Salha, the shattered psychiatrist father of the two women shot dead. “This man had picked on my daughter and her husband a couple of times before, and he talked with them with his gun in his belt.”

Abu-Salha told the local News & Observer newspaper his daughter had voiced fears about Hicks last week. “Honest to God, she said, ‘He hates us for what we are and how we look,’” Abu-Salha was quoted as saying.

The sister of slain Deah Shaddy Barakat echoed the demands. “We are still in a state of shock as we will never be able to make sense of this horrendous tragedy,” Suzanne Barakat said. “We ask that the authorities investigate these senseless and horrendous murders as a hate crime.”

Muslim activists also called for Hicks to be charged with hate crimes. “There is a high probability that the shooter targeted the victims because of their religion and national origin,” a statement from the American-Arab Anti-Discrimination Committee said. The group said it had recorded a jump in “reported hate rhetoric” recently following the release of Clint Eastwood Iraq War movie American Sniper, which has been criticized for its depiction of Iraqis.

But Hicks’s wife remained adamant that religion was not behind the slayings. “I can say with my absolute belief that this incident had nothing to do with religion or victims’ faith,” Karen Hicks told a press conference, maintaining that a “longstanding parking dispute” was to blame.

Muslims across the globe were quick to latch onto a viral campaign, which asserted that the killings had been under-reported by the U.S. mainstream media because of the religion of the victims. The hashtags #ChapelHillShooting and #MuslimLivesMatter were trending on Twitter, with many claiming the crimes would have garnered more attention had the gunman been a Muslim.

Investigators were piecing together a picture of the alleged gunman, who turned himself into police shortly after the shooting on Tuesday. A Facebook page believed to belong to Hicks showed dozens of anti-religious posts, including one calling himself an “anti-theist,” saying he has a “conscientious objection to religion,” and other memes denouncing Christianity, Mormonism and Islam. One post read: “I’m not an atheist because I’m ignorant of the reality of religious scripture. I’m an atheist because religious scripture is ignorant of reality.”

Photos of the three victims circulated on social media, including recent wedding pictures of Barakat and his wife.

Barakat was a second-year student in dentistry at the University of North Carolina while his wife was planning to begin her dental studies in the fall. Abu-Salha was a student at North Carolina State University, according to the UNC university newspaper, the Daily Tar Heel.

Neighbors of the victims struggled to come to terms with the killings, which shattered the peace of the normally tranquil neighborhood. “No one ever expected that to happen here of all places. And it’s certainly kind of stunning for most of the people,” Robert Brown, 25, told AFP. “It’s horrendous.”