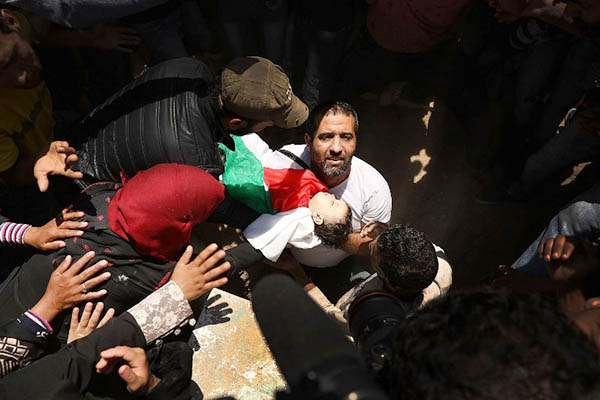 In her final embrace, Mariam al-Ghandour hugs the tiny body of her daughter Leila tight, tears rolling down her face. “The Israelis killed her,” she sobbed.

The health ministry in Gaza say baby Leila, only eight months old, died after inhaling tear gas along the border with Israel on Monday as major protests escalated into the bloodiest day in years, with at least 60 Palestinians killed.

The family prefers to focus on who fired the gas rather than the series of decisions that led to a baby being a few hundred meters from the Israeli border during the protests and clashes.

Leila is an outlier—13 years younger than any of the other victims and one of only two females. The vast majority have been killed by live ammunition fired by Israeli snipers but Leila was caught up in a cloud of tear gas, only temporarily painful for adults but potentially more dangerous for infants.

Mariam, herself only 17, explained that she had a dentist appointment “so I left Leila with my brothers at home.”

“My little brother took her and went to the border,” she said.

At the back of the room, 11-year-old Ammar sobs uncontrollably as he looks at the corpse. He says he mistakenly thought his sister was at the border with his mother and other family members. “So I took her with me on the bus.” He added: “I feel I am the reason [for her death].”

Close to the border he eventually found his mother Heyam and handed Leila over to her. They stayed only a few minutes, Heyam insisted, before tear gas rained down on them. “I could barely breathe,” she said. “We got away from the gas and gave Leila to my sister and went looking for two other children so we could leave. She drank juice but was crying a lot. Then she went silent. I thought she was sleeping.”

It was only when they got off the bus that they noticed her skin had turned blue.

“I rushed to the hospital. They told me she had been dead more than an hour,” Heyam said.

Tens of thousands of Palestinians rallied near the border fence on Monday, with smaller numbers seeking to breach it and clashes erupting. Israeli forces on the border used tear gas and sniper fire in response.

At least 60 Palestinians were killed throughout the course of the day. Another was killed on Tuesday, taking to 115 those who have died since protests broke out on March 30. Only one Israeli soldier has been reported wounded.

Israel has faced international criticism over the use of live fire, but defends soldiers’ actions as necessary to guard the border.

Israeli leaders allege Hamas, the Islamist movement that runs the Gaza Strip, is seeking to use the protests as cover to carry out violence. Monday’s protests were against the opening of the controversial U.S. embassy to Israel in Jerusalem, which had angered Palestinians who see the eastern part of the city as their capital.