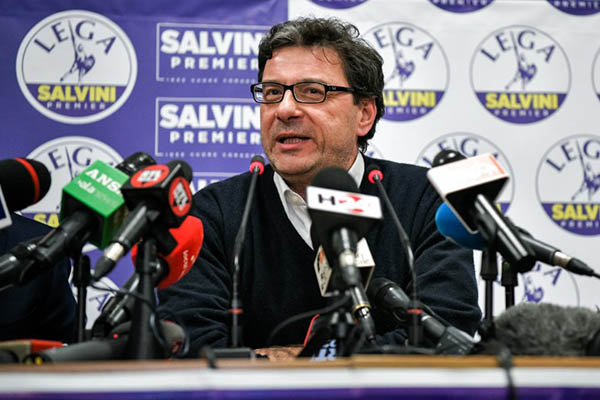 A surge for populist and far-right parties in Italy’s election could result in a hung parliament with a right-wing alliance likely to win the most votes but no majority after a campaign dominated by anger against immigration.

With over half the ballots from Sunday’s vote counted, the right-wing coalition was at 37 percent, including the far-right, Eurosceptic League party with 18 percent and media mogul Silvio Berlusconi’s Forza Italia (Go Italy) party with 14 percent.

That raises the prospect of League leader Matteo Salvini, who has promised to shut down Roma camps, deport hundreds of thousands of migrants and tackle the “danger” of Islam, becoming Italy’s next prime minister. The anti-establishment Five Star Movement, which has drawn support from Italians fed up with traditional parties and a lack of economic opportunity, was second with 31 percent.

“The March 4 vote yielded a result that Europe was afraid of and Italy perhaps did not expect on this scale,” columnist Marcello Sorgi wrote in La Stampa daily. “Defeated everywhere else in Europe, populism won here. Either it can govern or it will block the system.”

The boost for far-right and populist parties has drawn comparisons to Britain’s vote to leave the European Union and the rise of U.S. President Donald Trump. “The European Union is going to have a bad night,” Marine Le Pen, leader of France’s National Front, tweeted.

Brexit firebrand Nigel Farage congratulated the Five Star Movement, his allies in the European Parliament, “for topping the poll” as by far Italy’s biggest single party. The absence of an overall majority could mean weeks or months of negotiations to form a new government, however. “A parliament without a majority,” wrote business daily Il Sole 24 Ore.

Resentment at the hundreds of thousands of migrant arrivals in Italy in recent years fired up the campaign, along with frustration about social inequalities. “These are historic results,” Giancarlo Giorgetti, deputy head of the League, told reporters in Milan. Alessandro Di Battista of the Five Star Movement, said: “Everyone is going to have to come and speak to us.”

The ruling center-left Democratic Party, which has struggled to get across its pro-European message of gradual economic recovery, was left trailing with only 24 percent for its coalition. “This is a very clear defeat for us,” Michele Martina, a minister in the outgoing government, told reporters. Andrea Marcucci, one of the party’s lawmakers, said: “The populists have won and the Democratic Party has lost.”

If no party or coalition wins an overall majority, the results will leave Italy with few options. One is an “anti-system” post-election pact between the Five Star Movement and the League—a prospect that has spooked foreign investors and European capitals.

Projected results would give such an alliance 355 seats in the 630-seat lower house of parliament and 168 seats in the 315-seat upper house. The other would be a minority Five Star government, which could prove highly unstable. A third option would be a temporary government and eventually new elections.

In L’Espresso weekly’s online edition Marco Damilano wrote: “On the night of March 4, the winners are [Five Star Movement leader Luigi] Di Maio and Salvini. And there are two catastrophic losers: Berlusconi, the old man on his last lap, and his young heir [Democratic Party leader] Matteo Renzi.”

Berlusconi, a flamboyant three-time former prime minister, cannot hold elected office because of a fraud conviction but has put forward European Parliament President Antonio Tajani as his prime ministerial nominee. The billionaire, who won his first election in 1994, has returned to the limelight at the age of 81 despite a career overshadowed by sex scandals and legal woes. He was ambushed as he cast his vote in Milan by a topless woman from the Femen activist group who had “Berlusconi, you have expired” scrawled across her torso.

The election campaign was a gloomy one marred by clashes between far-right and anti-fascist activists, as well as a racist shooting spree by an extreme right sympathizer last month. Former White House adviser Steve Bannon—the man who helped Trump ride a populist wave to power—characterized the election as “pure populism.”

“The Italian people have gone farther, in a shorter period of time, than the British did for Brexit and the Americans did for Trump,” Bannon, who was visiting Italy for the election, told the New York Times. Bannon called a possible post-election deal between the Five Star Movement and the League “the ultimate dream.”

In the event of a stalemate, President Sergio Mattarella will have the key role of choosing a prime ministerial nominee who could command a majority in parliament but negotiations could take weeks or even months. “The verdict in Italy is always the same: the country is in constant instability. Being ungovernable has become endemic,” said Claudio Tito, columnist for La Repubblica.