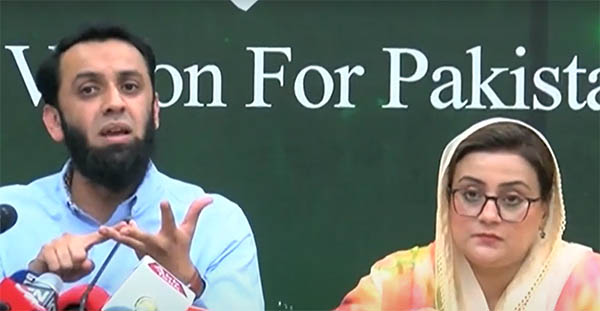 However, Riaz has rejected its authenticity, claiming that the audio was generated through “deep fake” technology. In a statement posted on Twitter, he claimed that his “name was used to settle personal and political scores,” adding that he did not wish to be involved in the political campaigns of any political party. He said he would pursue the matter legally.

The audio recording played by the PMLN leaders features Riaz and his daughter, Amber, talking about arranging a diamond ring for the then-first lady at the behest of her friend. In it, Amber claims that a three-carat diamond ring had been sent for Bushra Bibi, which had not been accepted.

While Amber does not specifically identify anyone, she says she met with “her” (Farah), who had asked her to arrange a five-carat diamond ring that would cost Rs. 10 million. Amber goes on to claim that the “friend” had told her “anyone” could own a three-carat ring and it was “unbecoming” for this to be gifted to the first lady. In response, the voice allegedly belonging to Riaz tells his daughter to inquire about the specifications of the ring “they” want and get it for them.

The call also contains a segment wherein Amber tells her father that she has been assured that “locked doors to his sites will be opened the next morning,” adding that “she” (Farah) had maintained that thjis had been guaranteed by then-prime minister Imran Khan himself.

“She (Farah) told me that she had received a phone call from Khan Sahab and said that he would take guarantee for the closure of the [cases] for which the reports have been submitted to him,” she says. “You will also get a letter from Shahzad Akbar tomorrow,” she added.

During their press conference, Tarar and Bukhari alleged that Farah Khan had “ruled over the entire country from her office in Punjab,” and accumulated “assets worth billions of rupees” in less than four years. Tarar went on to challenge Farah to return to Pakistan immediately—she has been in Dubai since corruption allegations were first levelled against her earlier this year—if she, and by extension Imran Khan and Bushra Bibi, were honest individuals.

Alleging that diamonds worth billions of rupees were sent to Dubai from Pakistan where they were sold off, he claimed that Farah had also been involved in the transfer and appointments of government officials in Punjab against hefty payments.

“The matter is not confined to the diamond dealings. Soon, information about the selling of expensive paintings and watches will emerge too,” he claimed, adding that the funds accrued through these sales were transferred to Pakistan via informal networks to avoid scrutiny. To a question, he said the government was ready to send the audio clips for forensic analysis if it were required by a court of law.

In a jibe, Bukhari claimed that Bushra Bibi and Farah Khan had helped the former prime minister remain financially viable by running the “financial affairs of Bani Gala.” She went to allege that Khan had “hired” the two as “frontwomen” for his corrupt practices.