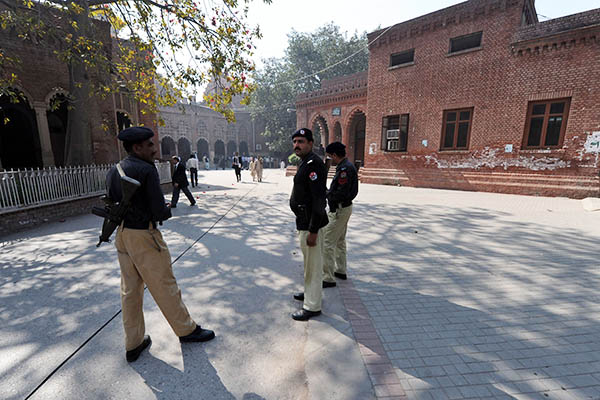 Police are seeking the brothers and cousins of the slain woman, who was three months pregnant when she was attacked.

The husband of Farzana Iqbal, the pregnant woman who was brutally beaten to death outside the Lahore High Court for marrying him against her family’s wishes, vowed on Wednesday he would fight for justice.

Farzana, 25, was attacked outside the court building by over two-dozen brick-wielding assailants, including her brother and father, who has been arrested, police said.

Three-months pregnant Iqbal had gone to testify in defense of her husband Muhammad Iqbal, who was accused by her relatives of kidnapping her and forcing her into the marriage.

Speaking by telephone from his home village of Jaranwala where had had gone to bury Farzana, Iqbal said: “We demand justice, we were being threatened since we got married.”

The 45-year-old said he and his wife had survived a previous attack during the first hearing of the case on May 28. “On Tuesday as we were going to court from our lawyer’s office almost 30 people attacked us, including her father, brothers and cousins,” he said.

The group of 10 or so people accompanying him were overwhelmed by the suddenness of the attack and fled in all directions, he said. “One of her brothers shot at her but missed, then the women in their group fell upon her and her brother and father finished her off,” he added.

Despite its gruesome and public nature, reaction in the media has been relatively muted—indicating a growing apathy within society amid rising extremism, said activists. “The court’s regular resident police force was mysteriously absent from the scene, unable to take preventive action—or to provide protection or pre-emption to this and countless other foregone and foretold dishonor killing cases,” said Tahira Abdullah, a prominent women’s rights campaigner.

“We are on an irrevocable trajectory toward extremist and un-Islamic interpretations of Talibanized Islam, to be ‘forcibly and compulsorily enforced’ on us,” she added.

Last year 869 women died in so-called “honor killings” according to the independent Human Rights Commission of Pakistan. Conviction rates are very low thanks to Pakistan’s blood-money laws, which allow kin to forgive perpetrators, usually family members in such cases.

Iqbal, however, was undeterred. “There are no hurdles, each and every single individual has been nominated and everybody saw them so there should not be any delay in bringing the perpetrators to justice,” he said.

NOT A Part Of Islam… BUT “Under an Islamic element of Pakistani law, known as the law of Diyat”…. Poor Christians Can’t Even Pray In School…