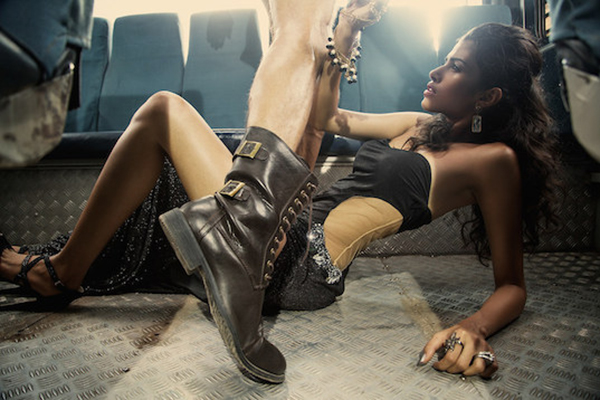 Photographer says shoot was not meant to ‘glamorize’ brutality.

Indian photographer Raj Shetye has sparked outrage with a fashion shoot that depicts a woman being harassed on a bus by a group of men, echoing a fatal gang-rape that shocked India and the world.

The project, The Wrong Turn, appeared on Shetye’s website in recent days before being taken down, according to media reports on Wednesday, but the photographs have been carried by other media outlets, including Buzzfeed.

The pictures a female model in high-end fashion looking harassed on a bus in various poses. In one image, she is on the floor with a man standing over her; one shows her struggling with two men gripping her arms; and in another, two men pin her down on the seats.

Shetye told Buzzfeed that the shoot was not based on the shocking and fatal gang-rape of a student on a bus in New Delhi in December 2012. That attack saw six men rape and torture a 23-year-old physiotherapy student after she was tricked into boarding a private bus on the way home from the cinema with a male friend. The victim, “Nirbhaya,” died 13 days after the attack from her injuries in a Singapore hospital.

The parallels in the shoot drew anger on social media, with Twitter users describing the images as “shocking,” “disgusting,” and “mind boggling.”

“Being a part of society,” said Shetye, “and being a photographer, that topic moves me from inside. I stay in a society where my mother, my girlfriend, my sister are out there and something like this can happen to them also.” He added: “This is in no way meant to glamorize the act, which was very bad. It’s just a way of throwing light on it.”