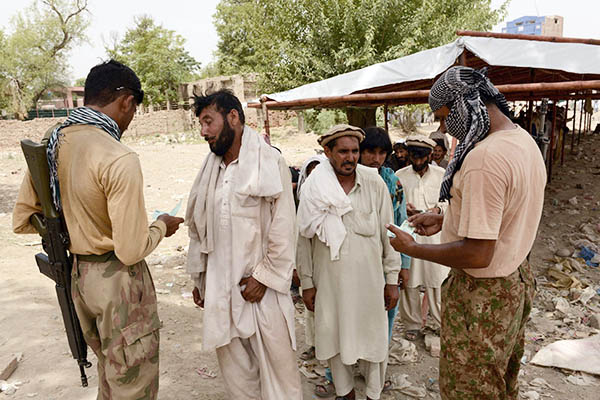 Soldiers check documentation of IDPs in Bannu. A. Majeed—AFP

The governor of Khyber-Pakhtunkhwa province on Monday ordered the dismissal of the FATA Disaster Management Authority chief, as Pakistan’s armed forces prepared to expand an ongoing military operation into another tribal district.

According to FDMA spokesman Shahid Khan, the director general of the organization was removed after Governor Mehtab Ahmed Khan received a large number of written complaints alleging inefficient distribution of aid and mismanagement. He said the internally displaced persons of North Waziristan, who have sought refuge in Bannu and its surrounding areas since the Pakistan Army launched Operation Zarb-e-Azb on June 15, had claimed that mobile SIMs issued to them had not yet been activated, preventing them from obtaining government aid. They also alleged unnecessary delays in registration of IDPs.

“The governor ordered the removal of Arshad Khan due to those complaints,” confirmed Taslim Sajjad, a government official in the FATA Secretariat. According to the FDMA, there are currently 955,996 registered IDPs, with nearly 75 percent of those living in Bannu.

Meanwhile, the government has decided to expand Operation Zarb-e-Azb to Bajaur Agency after a recent spate of cross-border attacks on security checkposts and military personnel.

“Terrorists have been attacking military checkposts in Bajaur Agency since 2012, and then fleeing across the border and seeking refuge in Afghanistan,” said Syed Jabbar Shah, the political administrator of Bajaur Agency. “The government has decided to launch a military operation in the border areas to combat the threat,” he added.

According to Shah, five towns of Tehsil Mamoon have been directed to vacate their houses and move to safer places ahead of the operation. “The military will initially launch the operation in the Katkot, Gagh, and Mullah Kalley areas of Tehsil Mamoon,” he added. The administrator said a majority of the civilian population has already fled the region.

Last week, around two-dozen terrorists attacked a military checkpost in Bajaur, killing three soldiers including a senior officer, before fleeing across the border into Afghanistan’s Kunar province. The Government of Pakistan has protested the attack, and urged the Afghan government to help rid the region of terrorist activity.