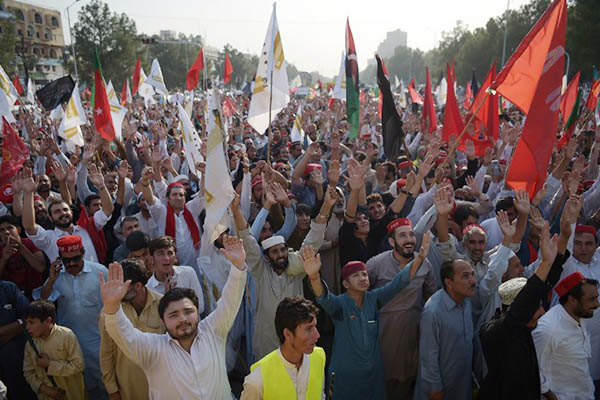 Hundreds of people from Pakistan’s militancy-racked tribal areas rallied in Islamabad on Monday calling on the government to abolish colonial-era British laws and merge the semi-autonomous northwestern region with the rest of the country.

The Federally Administered Tribal Areas (FATA) are still governed by a century-old legal code known as the Frontier Crimes Regulations (FCR). That includes the practice of collective punishment, allowing government authorities to hold entire clans responsible for the crimes of individuals.

Pakistan’s government has approved reforms abolishing the FCR and implementing national laws in the region along the border with Afghanistan, where militants once operated with impunity. But the changes are being delayed by political squabbles as Pakistan gears up for a general election due sometime next year.

“We are here to press the government to abolish the FCR law and extend the jurisdiction of Pakistani courts to FATA,” Mian Iftekhar Hussain, one of the speakers, told people at the rally. “More than 90 percent of tribesmen also want to merge the tribal areas with Khyber-Pakhtunkhwa province,” Hussain said as up to 2,000 tribesmen shouted slogans such as “Go FCR Go,” and “We demand merger of FATA in Khyber-Pakhtunkhwa.”

Shahabuddin Khan, a tribal lawmaker from Bajaur district, said they would continue pressuring the government until the FCR was abolished and the tribal areas were fully incorporated into the rest of Pakistan.

The seven tribal districts in FATA—Bajaur, Khyber, Kurram, Mohmand, North Waziristan, Orakzai and South Waziristan—are home to some five million residents, mainly ethnic Pashtuns. Following the U.S.-led invasion of Afghanistan in 2001, the region gradually became a hotbed for Islamist militancy and by the mid-2000s was considered one of the most dangerous places on earth.

But Pakistan’s Army cracked down on militancy after 2014, leading an operation into FATA that displaced thousands of people even as it help spur a dramatic improvement in security in recent years.