Fatalities Due to COVID-19 Cross 200 in Pakistan

The total number of deaths caused by the novel coronavirus in Pakistan hit 209 on Wednesday, with authorities reporting that 530 new cases had been found in the past 24 hours, raising the total number of confirmed cases to 9,749.

According to the government’s official dashboard, there were 90 new recoveries, raising the total recovered to 2,156. This leaves 7,384 active cases in the country, 423 more than there were a day earlier.

Dr. Faisal Sultan, the prime minister’s focal person on COVID-19, told media on Tuesday that the government expected the confirmed number of coronavirus cases to reach 12,000-15,000 by the end of this month—a week from now. Observers also believe that as testing is increased, cases that have already been present but not yet been identified are also likely to be found.

The country’s most populous province reported six new deaths in the past 24 hours, and no new recoveries, raising its casualty count from 45 to 51 with 724 recoveries. It currently has 3,553 active cases.

Overall, the province is now reporting 4,328 confirmed cases of COVID-19—the highest in Pakistan—against 4,195 a day earlier. Of the reported cases, 1,602 are from among the general population. According to the government’s official COVID-19 portal, provincial capital Lahore is now responsible for 23.58 percent of all cases in Pakistan.

According to provincial Chief Minister Usman Buzdar, authorities have started random testing in Lahore in a bid to isolate virus clusters and prevent COVID-19 from spreading.

Provincial capital Karachi is responsible for 15.25 percent of all confirmed coronavirus cases in Pakistan, and has now also recorded the highest number of cases in Sindh. According to the provincial Health Department, of the 3,053 cases in the province, 1,915 have been recorded in Karachi, of which 241 have recovered and 61 died. The metropolis has 1,613 active cases of the virus.

Overall, Sindh has recorded 66 deaths, five more than a day earlier and still the country’s second highest provincial death toll due to COVID-19. It also has 665 recoveries, leaving 2,322 active cases.

Sindh Chief Minister Murad Ali Shah on Tuesday warned that Larkana district was emerging as a new hotspot of the virus, and urged people to exercise social distancing and adhere to movement restrictions to curb the spread. 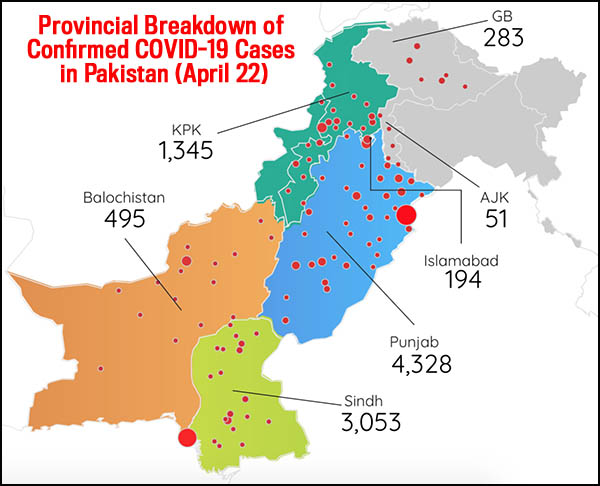 With 80 deaths, 6 more than a day earlier, Khyber-Pakhtunkhwa has the highest fatality rate caused by COVID-19 in Pakistan. The province on Tuesday night reported that it had recorded 69 new confirmed cases of COVID-19 and 33 new recoveries. Overall, the province has reported 1,345 cases of the coronavirus, 80 deaths, and 335 recoveries. It currently has 930 active cases, 30 more than 24 hours ago.

The most affected districts remain provincial capital Peshawar and Mardan, which Health and Finance Minister Taimur Jhagra has attributed to migration patterns in those cities, where a lot of laborers travel outside the province or country for work before returning to their homes.

On Monday night, provincial spokesman Liaquat Shahwani told a press conference that the provincial government had decided to extend its lockdown to May 5 in a bid to curb the local transmission of the coronavirus. He said that exemptions that had already been notified would remain in place.

Shahwani said the government wants to test 50,000 people across the province to gauge how the virus is spreading and would either ease or strengthen lockdowns based on the trajectory that emerges.

Overall, the province has reported 495 confirmed cases of COVID-19, with 6 deaths and 167 recoveries. It currently has 322 active cases. Provincial capital Quetta, according to the National Institute of Health, accounts for 2.61 percent of the total cases in Pakistan.

The Islamabad Capital Territory on Wednesday reported that the confirmed number of COVID-19 cases had increased to 194, with 3 deaths and 26 recoveries. The federal capital currently has 165 active cases, three more than 24 hours ago.

In Pakistan-administered Kashmir, which has thus far no deaths from COVID-19, no new confirmed cases of coronavirus were reported, sustaining its infections at 51. The region has reported 23 recoveries, leaving 28 active cases, six fewer than it had recorded a day earlier.

Globally, the virus has now infected more than 2,557,990 people, with over 177,680 reported deaths. Governments across the world have halted flights, locked down towns and cities and urged people to stay at home, but there are signs of easements to help shuttered economic recover. Overall, around 695,330 patients of the 2.5 million+ infected have recovered thus far.