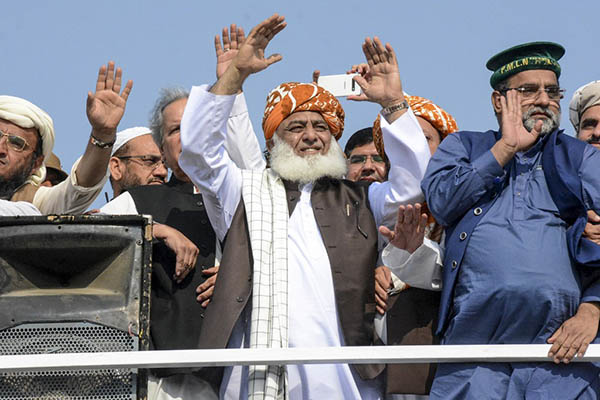 Advising the administrators of madrassas across Pakistan to ensure their own security, Jamiat Ulema-e-Islam (Fazl) chief Maulana Fazlur Rehman on Tuesday alleged the bombing at a madrassa in Peshawar had exposed the government’s claims of eradicating terrorism from the country.

Addressing a press conference in Sukkur, he warned madrassa officials to not risk their safety by waiting for the Pakistan Tehreek-e-Insaf-led government to improve its performance.

Referring to Railways Minister Sheikh Rashid—who had earlier sought to link the PDM’s rallies to a mounting terror threat—the head of the united opposition’s Pakistan Democratic Movement (PDM) said that while the timing was suspicious, no one should be accused of such serious charges without proof. He said that the government was fond of making false claims about having eliminated terrorists from Pakistan, but the Peshawar incident had clearly exposed those as “baseless.”

Referring to the PDM’s ongoing anti-government movement, which has already seen three massive demonstrations in Gujranwala, Karachi and Quetta, Rehman said the crowds had proved the public was tired of the “selected” government. The country’s economy has been driven to the edge, he warned, and people are now at risk of dying of hunger due to the skyrocketing prices of essential commodities.

The PDM chief said the opposition parties stood with the media against curbs imposed on it by the government, but urged them to avoid spreading any news without proof of its veracity. He called on the Pakistan Media Regulatory Authority to work within its given framework, claiming it often exceeded its mandate in its bid to censor critical voices.

He said the PDM was not ready to talk to the PTI, but stopped shying of ruling out dialogue with “others.” He also slammed the National Accountability Bureau, branding it the “B team” of Prime Minister Imran Khan’s government.

Condemning recent statements by French President Emmanuel Macron, in which he alleged all Muslims in France were “separatists” and vowed to continue with blasphemous caricatures of Islam’s Prophet, Rehman accused him of encouraging blasphemy in the name of expression. He said the French government should apologize to Muslims globally, as the blasphemous caricatures had hurt their sentiments. He also appealed to the people of Pakistan to boycott all products produced and imported from France, adding the JUIF would stage peaceful demonstrations against the irresponsible statements in the coming week.

Referring to the ongoing dispute between the federal and Sindh governments over who controls the Bundal and Buddo islands, Rehman said they were solely the property of the provincial government. Any attempt by the center to take control of this land would be unacceptable, he warned.