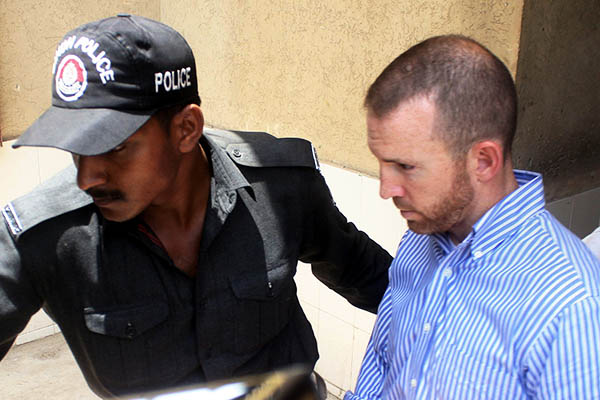 U.S. national was taken into custody after security found him carrying pistol ammunition while trying to board a plane.

An American FBI agent arrested in Pakistan for trying to board a plane while carrying pistol ammunition has been remanded in police custody until the weekend, officials said.

The man was held at Karachi airport Monday when security staff found 15 bullets for a 9mm handgun during routine checks for a flight to Islamabad.

Sources close to the case said Wednesday he was an agent for the Federal Bureau of Investigation, while the Washington Post described him as an FBI staffer on temporary assignment in Pakistan to help local authorities investigate corruption.

The Airport Security Force detained the man before handing him over to police. They filed an initial case against him for carrying illegal ammunition, which carries a maximum sentence of 14 years in jail.

A court on Tuesday remanded the man in police custody until Saturday for further enquiries. “The American failed to provide any legal permission for carrying bullets,” said senior police officer Rao Anwar.

Local television stations showed brief footage of the man in custody, shackled to a police officer, but coverage of the incident so far has been muted.

U.S. officials in Pakistan confirmed that an American had been arrested. “We are aware of the situation that has been reported and we are coordinating with the Pakistani authorities to resolve the matter,” a U.S. embassy spokeswoman said.

The incident comes at a time of relative tranquility in the United States’ often-fraught relationship with Pakistan, which has improved markedly since almost collapsing in 2011 amid a series of crises.

The fatal shooting of two men by CIA contractor Raymond Davis in Lahore in January 2011 sparked a diplomatic crisis between the two “war on terror” allies. A court eventually freed Davis following the payment of $2 million in blood money to the families of the dead men.

Even if we believe Washington Post’s words… we still don’t know why was he trying to board a plane with a gun and bullets?