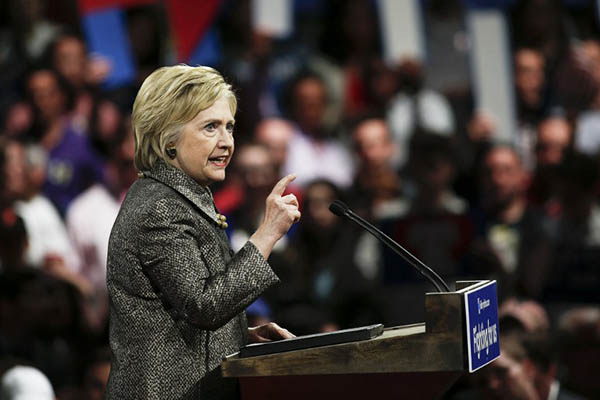 U.S. presidential frontrunner Hillary Clinton declared on Saturday that the FBI’s decision to announce a renewed probe into her use of email just ahead of voting was “unprecedented” and “deeply troubling.”

“It’s pretty strange to put something like that out with such little information right before an election,” the Democratic nominee complained, addressing cheering supporters at a rally in the must-win state of Florida.

Clinton remains the favorite to win the keys to the White House in the Nov. 8 vote, but her momentum was slowed on Friday when FBI Director James Comey made a shock announcement.

In a letter to congressional committee chairs, the agency chief said agents were investigating a newly discovered batch of emails linked to Clinton, to see if they contained classified material. A previous FBI probe was declared finished in July, after Comey’s agency found no evidence that Clinton had broken any laws through her controversial use of a private email server while secretary of state.

News reports citing FBI sources said the emails were found on a laptop used by Clinton’s aide Huma Abedin and her husband Anthony Weiner, who is subject to an unrelated investigation for sending explicit messages to a minor. But it is not clear whether the emails had any connection to Clinton’s work at the State Department, and Comey’s statement said only that investigators were studying to see if they are “pertinent” to the server probe.

Clinton’s opponent Donald Trump, however, has seized gleefully on the statement, and her Democratic allies have reacted with fury, arguing that Comey had been so vague in his letter that he was feeding unproven conspiracy theories.

“It’s not just strange, it’s unprecedented,” Clinton told the Daytona Beach rally. “And it is deeply troubling because voters deserve to get full and complete facts. So we’ve called on Director Comey to explain everything right away, put it all out on the table.”