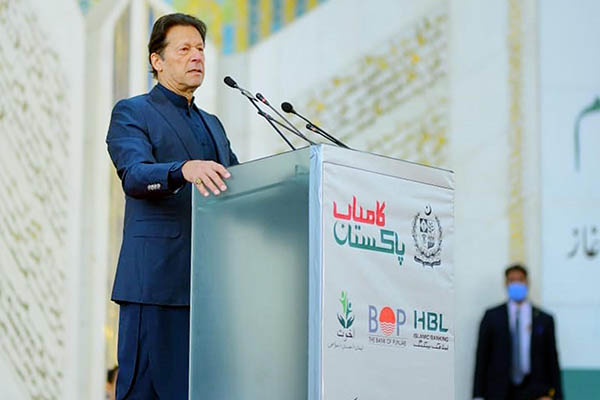 The Federal Board of Revenue (FBR)’s performance in recent months has allowed the government to subsidize petroleum products and electricity and provide relief to Pakistan’s citizen amidst global inflation, Prime Minister Imran Khan claimed on Wednesday.

“FBR has successfully knocked down February revenue target of Rs. 441 billion, posting robust growth of 28.5 percent, and up to the month growth of over 30 percent,” he said in a posting on Twitter. “Because of this performance of FBR, we are able to subsidize petrol, diesel and electricity and give relief to our people,” he added.

In a subsequent address at Faisal Mosque, where he launched an interest-free loan initiative under the Kamyab Pakistan Program, he similarly lauded the FBR, adding that the government’s relief measures were entirely a result of its performance, as the government now had “more money.”

Stressing that citizens should not fear that their taxes would be misused, he claimed that under his government all tax revenue would be used to elevate individuals, “reduce their burden and reduce inflation.” He added: “This is my promise to you. This money will not be spent on anything but you.”

On Monday, the prime minister announced that the government was slashing petrol prices by Rs. 10/liter and the electricity tariff by Rs. 5/unit as part of a series of relief measures to counter the impact of global inflation. The announcement was met with skepticism, with critics questioning how a government that—just a week earlier—had been warning people it could no longer afford any subsidies was able to provide them when global prices of oil were nearing their all-time peak.

Dubbing the move a “populist” measure, the opposition had alleged that the prime minister was damaging the national economy, adding that this move would prompt the need for further loans to finance it.