Fear and Anger in Youhanabad 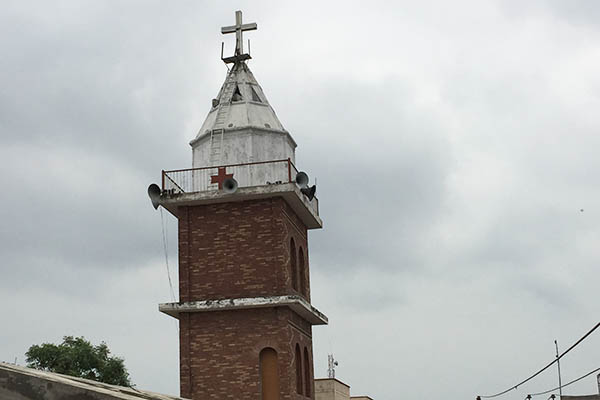 There is a long queue of Youhanabad residents waiting to see Reverend Irshad Ashknaz on a Monday morning in March. Assembled in a dimly lit room of the Christ Church, the crowd of dozens stands in silence, wielding the identification cards of men young and old—their sons, brothers, husbands, cousins. Ashknaz writes down each man’s name in a notepad that has already run out of paper; he keeps scribbling on the cover to make sure no one is forgotten. “I need to take down all the details,” he tells Newsweek. “The next time I meet senior police officials, I can inquire about them [for their families.]”

Near the exit, three women huddle together. Suraiya Masih, 60, tells Newsweek her husband was arrested last week. “We were sleeping when they came for him,” she says, tearfully. “They wouldn’t even let him talk or get dressed. They just kept slapping and screaming at him. I don’t know where he is.”

Masih’s husband is one of over 100 residents of the Youhanabad neighborhood that community leaders claim have been taken into police custody following a mob attack that left two people dead. Police claim they have arrested only 55.

On March 15, the Taliban attacked two churches in Youhanabad, leaving 23 dead and injuring nearly 70 others in the worst attack on the minority group since September 2013. Angry over the government’s apparent apathy toward the plight of their community, over 4,000 Christians took to the streets in protests that quickly turned violent. The mob smashed vehicles, damaged buses and blocked roads. It also dragged out of a police vehicle two Muslim men accused of terrorism before torturing and burning them alive. A subsequent investigation found the two men were innocent—passersby in the wrong place at the wrong time. That’s when the arrests started.

City police have registered terrorism cases against some 500 residents of Youhanabad, identified through video footage and photographs of the mob attack. Each night since, says Ashknaz, plainclothes policemen arrive, “prop up ladders, break down doors and pick up the men on basis of mere suspicion.” Residents claim police are even targeting children who can be seen in photographs.

The church committee has managed to secure the release of 17 men. One of them, 25-year-old Usman, died shortly after being freed due to police torture, according to his neighbors. Security officials insist he died of a heart attack.

A resident of Youhanabad, released five days after being taken into custody, told Newsweek on condition of anonymity that police had recognized him from a television interview and picked him up at a local drug store. “They kept calling me ‘choora’ and beat me up with their shoes,” he said, referring to a derogatory word for Christians. “They’ve broken a rib, and I have lashes on my back. They’ve burst my eardrums as well.” The 46-year-old said prisoners were also being denied food, water and sleep.

Christians make up two percent of Pakistan and are often discriminated against by the Muslim majority. In recent years, sectarian violence against the community has ramped up with attacks on Christian neighborhoods and churches. Nearly 100 people were killed in an attack on Peshawar’s All Saints Church in September 2013. Shama and Shahzad, a Christian couple, was bludgeoned to death over alleged blasphemy last November in a case currently pending before the Supreme Court. The similarities—and differences—between how the two cases of mob violence have been handled are not lost on the residents of Youhanabad.

“No one have ever been punished for all the crimes committed against the Christian community,” says one visitor at the Christ Church, claiming police appear more concerned with Muslim victims than Christian ones. The sentiment is echoed throughout Youhanabad. With a population of 100,000, mostly Christians, the area falls within the constituency of Punjab Chief Minister Shahbaz Sharif. Two weeks after the bombing, the PMLN leader known for his hands-on style of governance has yet to visit the heartbroken community. The federal government’s response has also been lacking. Interior Minister Chaudhry Nisar Ali Khan, addressing Parliament, termed the lynching the “worst form of terrorism.” His outburst prompted the independent Human Rights Commission of Pakistan to urge the authorities to exercise caution and “avoid giving the impression that they are more keen to pursue the killers of the two men than they are in protecting the minority community’s rights against terrorists attacks.”

Authorities admit there had been no breakthrough on investigations into the suicide bombings, but say the subsequent mob violence takes priority. “If we did not react quickly and arrest those involved in the lynching, the media would have pounced on us,” says Dr. Rizwan, superintendent of police (investigations). “People would have started pouring out of mosques to avenge the killings,” he added.

He isn’t wrong. Shortly after news of the mob violence went public, several Christian boys from the area were beaten, allegedly in retaliation to the lynching. A sign at the entrance of Youhanabad, with the district’s name flanked by two silver crosses, was reportedly torn down by a mob of Muslim men. A church has also been vandalized—it’s windows broken and doors marked with black paint. The attacks may be sporadic, but the fear they cause is very real.

“We have been living amicably in the locality for a long time, alongside Muslims. This incident has left us scarred,” says the reverend. Gul Bibi, whose 15-year-old son was picked up by security forces, is less diplomatic. “Our community was attacked. Our children died. Our church was bombed. But we are their [police] targets.”

People, stop picking on the weak and vulnerable!
Why is it that the mosque of the preacher who instigated burning of a Christian couple and that local thana never became a target for mobs?

It’s a one sided story and unfortunately no police version was incorporated in this piece of misreporting.
I am SSP Inv Lahore,responsible for investigation of both cases. I was shocked to see that a weekly of this stature publishes this type of flimsy and not-based-on-facts stories.
I am ready to give police version if any one still has professional ethics

dear Ayyaz,
yes please inform us what is the polices version for not arresting the muslim mob which burned a christian couple.