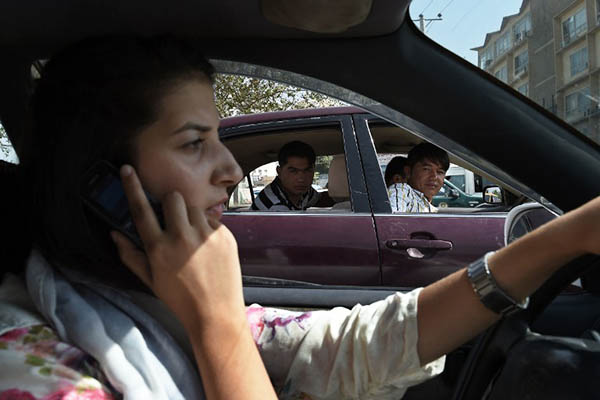 Harassment an everyday occurrence for drivers whose very presence is seen as ‘controversial.’

Since Rokhsar Azamee began driving the streets of Kabul last year, she has endured condescension, ridicule, and even threats to her life with some men deliberately causing “accidents” to harass her. But she will not be deterred.

The 23-year-old journalist learned to drive to avoid aggravation from men in the street as she waited each morning for a taxi with a driver who would not hassle her on the way to work. But even the purchase of her own car has not shielded her from condemnation in the male-dominated, ultra-conservative society of Afghanistan.

“For many men,” she says, “it is a new thing to see a woman drive a car, they will harass you. One way to do so is by causing an accident.” Once as she was heading home in her white 1997 Toyota Corolla, she was followed by a group of four or five men driving an SUV. Her anxiety growing, she kept driving until they blocked her in a semi-deserted street in downtown Kabul, forcing her to pull over.

But as the men began to clamber out of their vehicle, she saw her chance to escape—reversing quickly then hitting the accelerator. “It was very horrible experience for me,” she says.

It was not always like this. Up until the 1990s Afghan women were commonly found behind the wheel—even driving buses, in the big cities at least. But in 1992, when the communist regime in Kabul collapsed and civil war broke out, women drivers were slowly discouraged. And as the extremist Taliban group swept to power in 1996, women were banned not only from driving, but from even leaving their homes without a burqa or the company of a male chaperone.

Change did not come again until the U.S. invasion toppled the Taliban from power in late 2001 and a government backed by Washington took over. Gender equality was enshrined in the Afghan constitution, and millions of women came out from the shadows to attend schools and universities and work in offices again.

Fourteen years on, however, the idea of a woman driver is still seen as controversial, provocative and even immoral.

Islam does not prohibit women from driving, but laws and cultural norms vary throughout the Islamic world, from Saudi Arabia—where women are banned from driving entirely—to Iran and Pakistan, where women drivers are fairly common.

In Afghanistan, woman drivers are seen as a Western imposition and a rejection of Muslim values, Babrak, an Afghan man in his fifties, tells AFP. “Women, especially young girls, driving can increase immorality and even lead to prostitution in Islamic societies,” he says. “These women driving encourage our devout Muslim sisters towards immorality. It is becoming intolerable.”

His view is not uncommon in Afghanistan where ultra-conservative men fear such freedoms increase women’s independence and the lack of a male chaperone will result in increasingly liberal behavior. But in big cities like Kabul women are attempting to shift change into high gear. The increase in the number of women drivers has been growing at a steady rate: Kabul’s traffic department estimates that up to 1,000 women each year now apply to join driving schools in the Afghan capital alone.

In the early years after the end of Taliban rule that figure hovered around 50, Kabul’s traffic police chief General Asadullah told AFP. “The women have the right to learn, they have the right to drive, and we encourage them for that,” he says.

Social activist Sohaila Sama, 25, looks forward to driving her own car to the green plains of northern Afghanistan without persecution. “I have felt better, more confident since I learned how to drive,” she says. “When I see other women drive their vehicles, I feel like our country is moving forward towards a better future, a more civilized one.”

The progress is promising, but it may not be enough. A Taliban resurgence in recent months has U.N. officials and rights activists fearing that the fragile gains women have made could be further eroded when international forces eventually leave.

Testimony from women’s rights activists who fled the Taliban’s recent brief capture of the northern city of Kunduz revealed harrowing stories of death squads methodically targeting women—an ominous blueprint of what could happen should the insurgents ever return to power.

Azamee—who, bareheaded and with the radio blaring, took AFP on a ride through the streets of the capital—is frustrated but determined she will not back down. “I am proud, because when I started driving, I think I set an example for other women,” she says. “Yesterday one of my friends called and said, ‘You have to come to my office.’ I said, ‘Why?’ She said, ‘I have bought a car and I will take you around the city.’ I was like, that is cool!”