Fear and Hunger in West Mosul 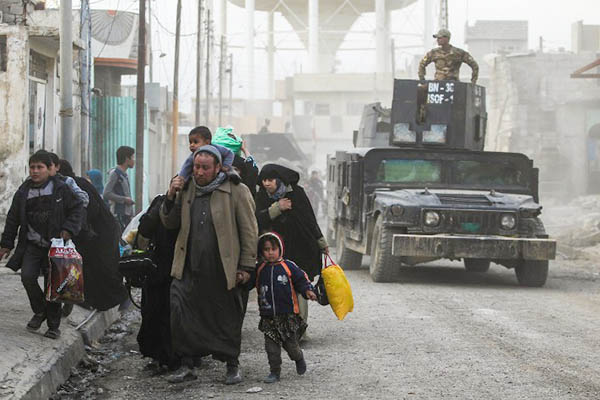 Under Islamic State, residents of Iraqi city had little food, were forced to hide for months as battles raged around them.

The luckiest of west Mosul’s residents under Islamic State group rule had tomato concentrate. Potatoes were an almost unheard-of luxury. In parts of Iraq’s war-torn second city seized this week by Iraqi forces, hundreds of residents queued up behind a government truck as they waited for their first proper meal in weeks.

“We have been under siege for more than six months on this side” of Mosul, said Khaled Meshaal, a resident of Al-Mansur district, which government forces took on Wednesday. “We bought food four times but we finished it all, there was nothing left.”

As Iraqi forces closed in on the jihadists’ last Iraqi urban stronghold, residents were forced to hide in their homes and get by on whatever they had managed to stockpile. “The markets were empty: we only had a little rice, flour and dates,” said Abu Ahad, a 45-year-old from Al-Mansur.

In a street devastated by fighting, hundreds of men with shaggy beards waited to receive cartons containing bottles of oil, boxes of baby formula, rice, tea and sugar. The cardboard packages were emblazoned with the label “Ministry of Migration and the Displaced.”

Women queued in a second line. Some had removed the veils the jihadists had forced them to wear. Their black robes were covered with dust. Each resident presented an ID card before being given a parcel. The crowd stirred and pressed against the truck, as people pushed and shoved. Soldiers shot in the air to restore order.

Fahd Fadel managed to strap his box of aid on to a bike before picking his way through piles of rubble strewn across the street. “I feel like I’ve been born again,” said the 50-year-old, adding that he had a wife and five children to feed. “For three months there was nothing to buy in the markets, but these last days it was hell. We stored basic products—water, cracked wheat and tomato concentrate—and we ate one meal a day.”

He stood amid a scene of destruction. Houses were reduced to piles of shredded concrete and twisted scrap metal. On the ground nearby lay the body of a jihadist, his throat cut and his heart ripped out.

“The families of I.S. fighters had plenty of reserves. They had enough to eat and drink, but if they saw a starving child in the street they would not give it anything,” said Yasser Nabil.

The former civil servant in his thirties, whose yellow and blue tracksuit stood out amid the grey landscape, said he had his parents and four young children to feed. “They are asking for food, but we have nothing to give them,” he said. “We ate one meal a day and we didn’t have baby formula.”

Khaled, 47, said he had no food left at home and this was the first aid to reach the district. He had come to collect food for his five children. “Everything was very expensive and nobody had any money left,” he said. “In recent weeks we ate one meal a day, whatever we had in the house—lentils or cracked wheat.”

A few streets away, food was distributed by Hashed al-Shaabi (Popular Mobilization) paramilitaries. Residents crowded around their small white pick-ups to be given beans, bottles of water, cakes and boxes of cigarettes. Children chased after the vehicles as they moved off.

Abdel Razzaq Abdel Saheb, an official from the southern city of Basra who had come to join the war effort, called on Iraqi citizens to come to the aid of their compatriots. “People need water, food, petrol and gas,” he said.