Home Latest News Fear and Violence in the North

Fear and Violence in the North 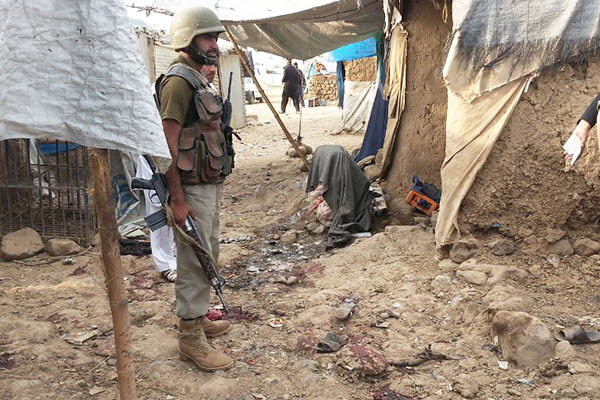 Security officials at the site of the bombing in Hangu. Basit Shah—AFP

At least 23 militants and seven civilians have been killed in northwest Pakistan in attacks on rebel hideouts, a checkpoint clash and a motorcycle bombing, officials said Sunday.

The deaths occurred during attacks on Taliban hideouts by Pakistani jets, a U.S. drone strike, a gunfight at a security forces checkpoint and the bombing at a camp for displaced people.

A U.S. drone attack on Sunday killed at least two militants in Karezai Pal village in neighboring South Waziristan, security officials said. “A U.S. drone fired two missiles at a vehicle and at least two militants were killed and one was wounded,” a senior security official told AFP on condition of anonymity. “The militants had just parked their vehicle outside the main gate of a compound and had asked for drinking water from inside. Just when they were drinking water standing on the road, drones fired two missiles.”

Their identities were not known but initial information indicated that they were not locals, the official added. A militant source who called AFP from an unknown location also confirmed the missile strike and casualties.

Pakistan’s government, in a statement issued by the foreign ministry late Sunday, condemned the drone attack. Pakistan routinely protests against U.S. drone strikes, which have been targeting militants in the tribal areas since 2004, saying they violate its sovereignty and are counterproductive in the fight against terror.

In another incident in the northwest, six militants were killed early Sunday in a gunfight that erupted after they attacked a paramilitary checkpoint in the Khyber Agency bordering Afghanistan, officials said. The Khyber district is a gateway for NATO supplies to Afghanistan.

“A group of about 30 militants attacked the Ghundi checkpost early Sunday, but security forces had prior information about it and were well prepared,” a senior security official told AFP on condition of anonymity. “At least six militants were killed in the gunfight and the attacking militants were forced to flee,” the official said, adding there no casualties among security forces.

Also on Sunday a bomb planted in a motorcycle killed at least seven people and wounded 10 in Hangu, police said. The bombing took place at a camp for people displaced by unrest in the Orakzai and Khyber tribal districts. Nobody immediately claimed responsibility but the area has a history of militant and sectarian violence.

Pakistan’s military has been fighting since June to destroy bases of the Taliban and other militants in the tribal areas. More than 1,000 militants and 86 soldiers have been killed so far, according to the military. The area is off-limits to journalists, making it impossible to verify the numbers.