Fear in Balochistan After Spate of Acid Attacks 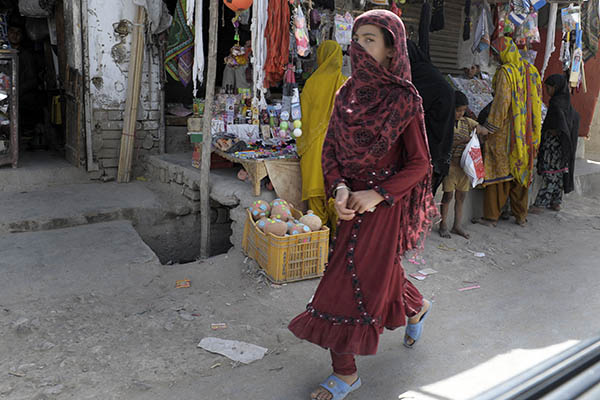 A recent spate of acid attacks in Balochistan province has sparked an impassioned debate about Pakistan’s rising Islamization, which is forcing an increasing number of women to stay at home.

The horrific crime, which disfigures and often blinds its overwhelmingly female victims, has long been used to settle personal or family scores with hundreds of cases reported every year. But two fresh attacks on consecutive days in Balochistan province last month, where until a few years ago such assaults were unheard of, suggests a new pattern is emerging.

On July 22, two men on a motorcycle sprayed acid-filled syringes on two teenage girls who were returning from a market in Mastung town. The day before, four women aged between 18 and 50 had suffered the same fate in Quetta, in the market area of Sariab. They were partially burned.

“In accordance with our Baloch traditions, they were wrapped in big shawls as well as covering their faces. That … saved [them] from severe injuries,” said Naz Bibi, mother of two of the victims. Asked about the attackers, she said: “I can only request that they should not treat women in such a cruel way.”

In most acid attack cases around Pakistan, the majority of victims know their attackers. When caught, relatives found guilty speak of punishing their victims for having sullied their “honor” or that of their family with “indecent” behavior. But, in these latest cases, the victims had no known connection to their assailants, which has led campaigners to suggest the attacks are part of rising religious extremism in the province.

Vast and sparsely-populated but rich in resources, Balochistan has long been wracked by a separatist insurgency that has staunch leftist secular elements, including strong participation by women, and which reveres Communist icons like Argentine revolutionary Ernesto ‘Che’ Guevara.

Separatists say the attacks on women are the latest battlefront in an ideological war between the rebels, who are fighting for a greater share of the region’s mineral and gas wealth, and state-backed Islamist proxies who want to terrorize the population into acquiescence.

“The aim of these inhuman acts is to prevent women from participating in education, as well as social, political and economic aspects of life by creating a climate of terror,” said Jahanzaib Jamaldini, vice president of the Baloch National Party, which is fighting for greater autonomy.

Last week, three more women suffered injuries to their legs and feet in yet another attack—though police and senior officials have so far said the latest incident was a case of a “family feud.”

Mohammad Munzoor, a brother of one of the victims, lamented that the attackers were still at large. “They roam the area on motorcycles and the local people have spotted them,” he said.

In the Sariab district of Quetta, the scene of one of last month’s attacks, Islamist groups like the Ahl-e-Sunnat Wal-Jammat (ASWJ), are increasingly coming to the fore. Dressed in Arab garb, they are able to roam the area armed with automatic weapons without fear of molestation, leading many to believe they are given tacit state backing.

“ASWJ controls the area with dozens of armed men,” said one young resident, standing under the group’s flag as it fluttered in the breeze, adding that their presence scared families into preventing women from being out in public. The group said the accusations were “without any basis.”

“We condemn these attacks,” said Ramzan Mengal, the group’s leader in Balochistan.

The acid attacks also fit a wider pattern of a steady erosion of women’s rights, especially in separatist and erstwhile relatively secular strongholds. Al-Furqhan, an obscure militant group, recently appeared in the one-time separatist rebel stronghold of Panjgur district, which borders Iran, threatening private schools over the teaching of girls, according to residents.

In an atmosphere rife with fear, no suspects have so far been arrested and no group has claimed responsibility. The first recorded acid attack in Balochistan came in 2010, with two more reported in 2012.

Mohammad Aslam, a women’s tailor in Sariab, has seen sales drop by three quarters since the market attack. “Women are afraid to step out of their homes or their men stop them from going,” he said.

Shopkeepers in Mastung reported a similar decline in sales. “We fear that such incidents could increase and leave no space for women in an already male-dominated society,” said human rights activist Saima Jawaid.