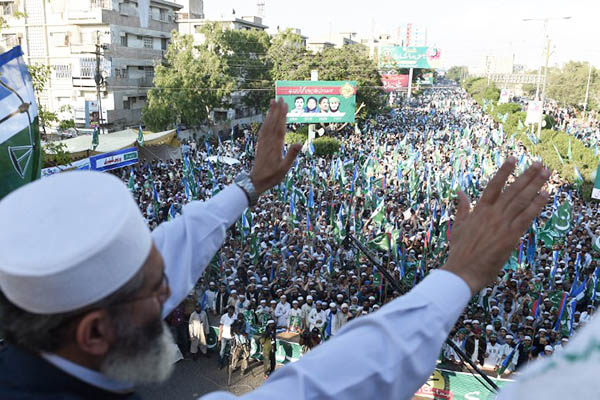 Pakistan’s clergy is ramping up protests to retain its waning influence on Islamabad.

Pakistan’s clergy has rarely been challenged since state funds helped spawn madrassahs in the 1970s. Today, there are some 20,000 madrassahs officially and about 80,000 unofficially (including scores of “illegal” ones in Islamabad). Uncounted millions attend them.

Last week, suddenly, clerical leaders felt insecure and challenged the state as they have never done previously. Their first show of strength was the 200,000-strong rally in Rawalpindi’s Liaquat Bagh, protesting the hanging of a governor’s assassin. The next provocation was the Punjab Protection of Women against Violence Act, 2015. Politico-religious leaders reacted by telling crowds how this law violated the Quran and, therefore, the Constitution. All religious parties regardless of sect gathered at the headquarters of Jamaat-e-Islami in Lahore to proclaim that, “Enemies want the country to become a secular and liberal state,” and warned the government to rescind the law by March 27.

A message is being sent. The clergy is reacting against their “disempowerment” after military operation Zarb-e-Azb in the tribal areas against the Al Qaeda-backed Taliban. Before the operation, an all-parties consensus had begun “negotiating peace” with them, another name for a kind of surrender. But Pakistan had transitioned from one Army chief who said he couldn’t take on the Taliban because of the “blowback,” to another chief who favored regaining the writ of the state by taking on the fountainhead of extremism empowering the clergy. According to Taliban-watching journalist Rahimullah Yusufzai, the freedom of the kidnapped Shahbaz Taseer was made possible by Zarb-e-Azb “which deprived the militants of their sanctuaries in North and South Waziristan.”

Pakistan first empowered the madrassah and its clerical hierarchy through cross-border jihad in violation of the doctrine of the monopoly of violence of the state. Now the state wants to roll back the jihad and its beneficiaries—even informing India that some heretofore state-supported jihadist groups had entered the Indian state of Gujarat to destroy the temple of Somnath. The coming disempowerment is being felt. The madrassahs flexing their muscle attests to that.

This is a crucial moment for Pakistan’s establishment to take a decisive stand and not leave any doubt in this matter – come out and openly tell the clergy (and its right-wing political beneficiaries) that past policies were mistakes which they have learnt from and will undo from now on. That will silence most of these women-hating, regressive old men into a whimper and help Pakistan finally move in the right direction.