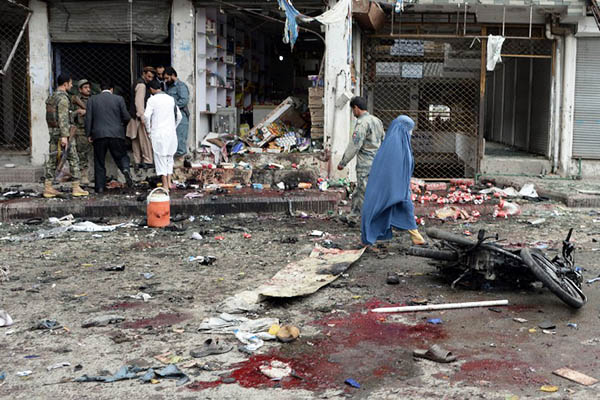 Taliban and Islamic State fighters are set to mark this year as the bloodiest fighting season in a decade.

Claims that the Islamic State group carried out a deadly suicide bombing in Afghanistan raise questions about whether the culprits are the real deal or Taliban turncoats now waving the I.S. black flag. Either way, war-weary Afghans seem to be in for the bloodiest fighting season in a decade.

The bomb on Saturday ripped through a crowd of government officials waiting to draw their salaries outside the Kabul Bank in Jalalabad, killing at least 34 people and wounding more than 100. It was the most lethal bombing in the country to be claimed by insurgents allegedly allied with I.S., which has captured swathes of territory in Syria and Iraq but never formally acknowledged having a presence in Afghanistan.

Afghan President Ashraf Ghani repeated the claim by the attackers in a speech on Saturday, intensifying fears that the I.S.’s brutal reign of terror was creeping into Afghanistan, already in the grip of a fierce Taliban insurgency. But analysts—and even some officials within the Ghani administration—view the claim with caution. It remains unclear whether the self-styled I.S. attackers have the official sanction of Abu Bakr al-Baghdadi, the self-proclaimed caliph of the Islamic State.

“There are two type of I.S.,” deputy Afghan intelligence chief Hesamuddin Hesam told parliament on Sunday. “One that operates in Syria and one that is in Afghanistan. In Afghanistan they are the same old Taliban who have swapped their white flag with black, and have become more swift and deadly.”

The Taliban, which distanced itself from Saturday’s attack, have seen defections in recent months with some insurgents apparently adopting the I.S. flag to rebrand themselves as a more lethal force as NATO troops depart.

“We’ve known that I.S. has been in Afghanistan for some time. [Saturday’s] attack… may just reflect I.S.’s desire to appear active while it is under pressure in Iraq and Syria, but if we see follow-on attacks, a pattern may emerge,” said J.M. Berger, analyst and co-author of ISIS: The State of Terror. “However, I think caution is in order until we get a statement from one of I.S.’s official media foundations,” Berger told AFP.

In February a U.S.-led NATO drone strike killed Mullah Abdul Rauf Khadim, a former Taliban commander and a Guantanamo detainee who led around 300 men suspected of links to I.S. in the volatile southern province of Helmand. And in March Hafiz Waheed, a successor to Khadim, was killed along with nine others in the Sangin district of Helmand, according to the Afghan defense ministry.

It is not known whether the men had the official sanction of I.S., which announced its presence in South Asia a year ago but has struggled to expand its footprint as it did in the Middle East.

“Afghanistan is both geographically—and ideologically—far away from the Islamic State,” said Graeme Smith, a senior analyst with the International Crisis Group in Afghanistan.

Islamic State espouses a brand of Salafism at odds with the Hanafi school of Sunni Islam in Afghanistan, Smith pointed out. “It’s not clear how high Afghanistan figures in the Islamic State’s priority list,” he said.

Ghani has repeatedly raised the ominous prospect of I.S. making inroads into Afghanistan, without offering evidence. Some local observers accuse him of grabbing world attention by playing up the I.S. threat in the face of dwindling foreign aid and as international troops depart.

Barely 12,000 NATO troops remain in Afghanistan, from a peak of 130,000, to train and support local security forces. “I.S. in Afghanistan is more psychological warfare, more myth than reality,” said former Afghan intelligence chief Amrullah Saleh. “Has Abu Bakr al-Baghdadi claimed the Jalalabad bombing? No. Apart from the statement [from insurgents] does Afghanistan have anything to back up that I.S. was behind it?”

But whatever the color of the flag, the brands of terrorism remain the same, said Saleh.

Saturday’s attack bore chilling similarities to a Taliban suicide attack on Kabul Bank in Jalalabad in 2011, which killed nearly two dozen people as police officials were collecting their paychecks. “So we have mass murder exhibit A and mass murder exhibit B. It shows the same dirty and lethal tactics by insurgents operating with different brand names and flags,” Saleh said.

An upsurge in attacks has taken a heavy toll on ordinary Afghans, bracing for the Taliban’s annual spring offensive, which security analysts expect to be the bloodiest in a decade.

Already in the first three months of 2015 civilian casualties as a result of ground fighting were eight percent higher than during the same period last year, a recent U.N. report said.