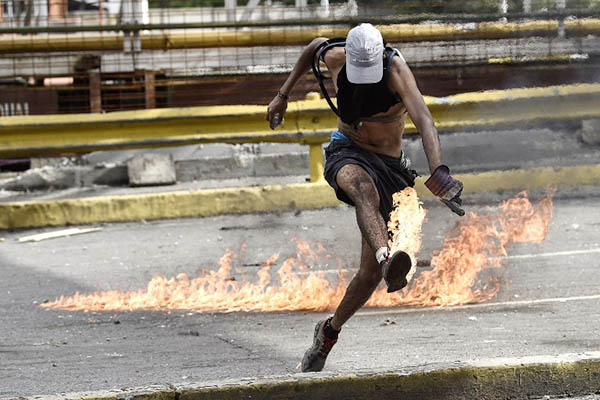 International fears over Venezuela’s growing unrest soared on Friday as prosecutors said the death toll in months of anti-government protests had passed 100, and a political gridlock between President Nicolas Maduro and the opposition worsened.

The climbing tally of fatalities, rising to 103 since April, underscored the spiraling chaos in the oil-rich but increasingly impoverished South American nation. Stakes have risen further with the United States threatening economic sanctions if Maduro plows on with a controversial July 30 election of a body to rewrite the constitution.

On Thursday, a nationwide strike called by the opposition saw large parts of the capital Caracas and other cities paralyzed, and violent clashes erupt between protesters and riot police. Prosecutors said the five fatalities occurred during demonstrations on the outskirts of Caracas, in the city of Valencia, and in northern Zulia state. Victims were aged between 15 and 34. They increased the number of protest-linked deaths since April 1, when demonstrations turned violent and security forces boosted a crackdown.

According to a Venezuelan NGO monitoring detentions, Foro Penal, 261 people were arrested during the 24-hour strike.

By Friday, the situation in the streets had calmed, with barricades being cleared away, businesses reopened, and the Caracas metro functioning. But concerns abroad have spiked. The United Nations, European Union, Organization of American States, the Catholic Church and most of Latin America’s major countries are all urging Maduro to shelve his plans and open dialogue.

So far, however, there is no sign Maduro and his government will change the path they have set themselves. The president instead has vowed to maintain the July 30 election of 545 members to the “Constitutional Assembly” to rewrite the constitution. And the military, which has reaffirmed loyalty to him, has said it will protect the vote.

Yet the opposition coalition feels invigorated since an informal plebiscite it held last weekend saw more than a third of the electorate reject Maduro’s plan and call for early elections. It also claimed that 85 percent of the country followed Thursday’s strike—an assertion disputed by Maduro, who counterclaimed the stoppage barely registered.

“We are keeping up the pressure,” said Freddy Guevara, a lawmaker in the opposition-controlled parliament. He said more protests would take place Saturday, and “next week will be the final stretch to bring about change in Venezuela and force the withdrawal of this fake Constituent Assembly.”

But Maduro, who termed the opposition vote “illegal” and warned “conspirators” against his regime would be punished, has shown no sign of backing down.

Venezuela’s supreme court, which has systematically sided with Maduro to sideline the parliament, rejected a declaration by the legislature to name 33 judges for a parallel supreme court. The tribunal warned that opposition lawmakers risked charges of “usurpation” for making that bid, which it called “incitement to subversion.”

“The dictatorship accuses us of creating a ‘parallel state.’ But who is usurping parliament’s functions?” railed Guevara.

At a summit of the South American trading bloc Mercosur in Argentina, member states warned Venezuela faced permanent exclusion from the group unless the government opened dialogue. “Our foreign ministries formally recognize the rupture of democratic order,” the leader currently in the rotating chair of Mercosur, Brazilian President Michel Temer, said.

Caracas shot back that it viewed the summit as “illegal.”

Venezuelans, meanwhile, are suffering under an economic crisis that has led to shortages of basic goods and soaring inflation. Many have left for neighboring countries Brazil and Colombia. Colombia announced it was reinforcing military personnel along its border with Venezuela, saying it was to contain an outbreak of foot-and-mouth disease in livestock.

Please explain the picture, it is unclear what has happened.