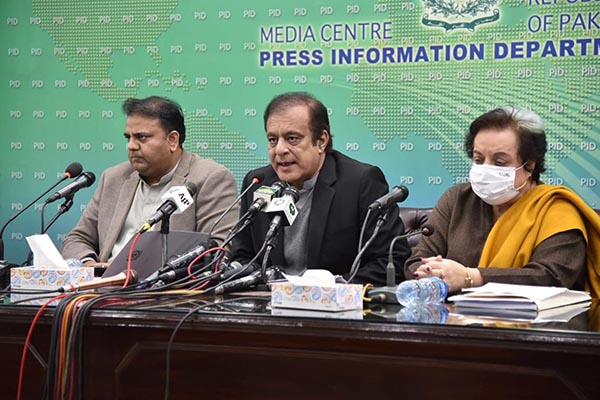 Inquiry to be completed within 45 days, with a mandate of fixing responsibility of anyone who benefited from the agreement with the assets recovery firm

The federal cabinet on Tuesday constituted an inquiry committee to investigate within 45 days the “revelations” of the Broadsheet LLC scandal and fix responsibility on those Pakistanis who allegedly benefited themselves and laundered money to offshore bank accounts.

Addressing a press conference, Information Minister Shibli Faraz—flanked by Science and Technology Minister Fawad Chaudhry and Human Rights Minister Shireen Mazari—said the committee would be led by a former judge of either the Supreme Court or a high court. “The committee would comprise one representative each of the Federal Investigation Agency (FIA) and the Attorney General for Pakistan, besides a senior advocate to be nominated by the prime minister,” he said, adding that strict action would be taken against anyone identified by the committee as having “looted” the national exchequer.

“The Broadsheet verdict was based on facts about the corruption stories of previous rulers,” claimed Faraz, even though the ruling primarily dealt with the recoveries that could potentially have been obtained if the deal with Broadsheet had not been cancelled, and does not actually fix any corruption on any identified party. “It contains details of corruption of loot and plunder committed before 2000, but another inquiry was required to look into the wrongdoings done after 2000,” he added.

Reiterating the incumbent government’s longstanding narrative of former rulers having benefited from NRO [National Reconciliation Ordinance] concessions, he alleged that previous governments had “misappropriated the national exchequer time and again.” To a question, he claimed that Broadsheet had unearthed the hidden properties of the Sharif family—a false assertion as the U.K. ruling has cited a JIT ruling of Pakistan’s Supreme Court for determining offshore assets.

To another question, Faraz said the government, along with the public, was primarily interested in recovering “looted money,” and would take action against any corrupt individual regardless of their party affiliations. [The PPP’s] Surrey Palace, Swiss accounts, Omni case, fake bank accounts case, all are on the radar of the committee, he said, adding that the Terms of Reference of the committee covered the inquiry committee’s mandate.

The Terms of Reference for the inquiry committee, which has been empowered to summon any individual or record from any organization it deems fit, are as follows: